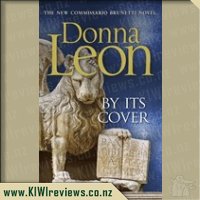 Disclosure StatementFULL DISCLOSURE: A number of units of this product have, at some time, been supplied to KIWIreviews by the company for the purposes of unbiased, independent reviews. No fee was accepted by KIWIreviews or the reviewers themselves - these are genuine, unpaid consumer reviews.
Available:
4th April 2014

By Its cover product reviews

By Its Cover is the much anticipated twenty-third instalment in Donna Leon's bestselling crime series, where Commissario Brunetti is better than ever as he addresses questions of worth and value alongside his ever-faithful team of Ispettore Vianello and Signorina Elettra.

When several valuable antiquarian books go missing from a prestigious library in the heart of Venice, Commissario Brunetti is immediately called to the scene. The staff suspect an American researcher has stolen them, but for Brunetti something doesn't quite add up.

Taking on the case, the Commissario begins to seek information about some of the library's regulars, such as the ex-priest Franchini, a passionate reader of ancient Christian literature, and Contessa Morosini-Albani, the library's chief donor, and comes to the conclusion that the thief could not have acted alone.

However, when Franchini is found murdered in his home, the case takes a more sinister turn and soon Brunetti finds himself submerged in the dark secrets of the black market of antiquarian books. Alongside his ever-faithful team of Ispettore Vianello and Signorina Elettra, he delves into the pages of Franchini's past and into the mind of a book thief in order to uncover the terrible truth.

I must begin by declaring that I have not read any of Donna Leon's previous 20 plus books so I cannot say how this present novel compares to previous writings. What I can say however is that this book left me somewhat perplexed and disappointed and wondering if I had missed something. Had I not been reviewing this book I would not have persevered to finish it so it was almost under sufferance that I read every word in this book to the end.

The blurb on the back had immediately piqued my interest and I thought this would be a quick easy to read novel that I would very much enjoy. I love a good detective story even more so when it is based in Italy so started reading this thinking it would be a very enjoyable book. By the end of the first page I was already feeling a bit lost and confused but by page two my hopes had risen with a theft being reported from the Biblioteca Merula in Venice. By page five I was being introduced to the fact that the system in Italy was a little corrupt and underhanded - a point which continued to be made throughout the book. Then the environmental damage being done to Venice was broached upon. This was followed up by a lot of reference to the social system in Venice and nobility. All very interesting to know and if you know nothing about Italy and Venice then you will indeed be enlightened somewhat by reading this.

By page 20 I was feeling that I was really going to struggle to finish the book when the reason for the thefts and possibly a very good crime plot was (I thought) revealed with many maps, but no text, being removed from books. Rather disappointingly (for me) however what could have been a brilliant thriller based on why the maps and illustrations had been removed (a search for buried treasure or a shipwreck or bounty from a World War I wondered) was not followed up.

I won't ruin the story for those of you that clearly love the Commissario Brunetti Novels except to say that they are not for me. I won't be reading another and as that is the case can hardly recommend this. I always feel bad as a reader when I don't enjoy a book, that some one has clearly gone to a lot of effort to write and have published, however for $35 I would expect a more readable novel.

Score: 9.3
Product reviews for listing 1021: I Didn't do it for You: How the world betrayed a small African nation -  Written by Michela Wrong

Scarred by decades of conflict and occupation, the craggy African nation of Eritrea has weathered the world's longest-running guerilla war.

The dogged determination that secured victory against Ethiopia, its giant neighbour, is woven into the national psyche, the product of a series of cynical foreign interventions.

Fascist Italy wanted Eritrea as the springboard for a new, racially pure Roman empire, Britain sold off its industry for scrap, the United States needed a base for its state-of-the-art spy station, and the Soviet Union used it as a pawn in a proxy war.