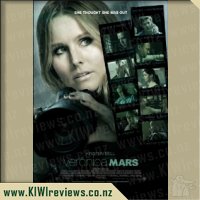 In less than 10 hours Kickstarter had raised the money to make this movie. On its final campaign day, the project broke the record for the most backers on a single Kickstarter project...

On the eve of graduating law school, Veronica Mars has put Neptune and her amateur sleuthing days behind her. While interviewing at high-end New York law firms, Veronica Mars gets a call from her ex-boyfriend Logan Echolls who has been accused of murder.

Veronica heads back to Neptune just to help Logan find an attorney, but when things don't seem right with how Logan's case is perceived and handled, Veronica finds herself being pulled back into a life she thought she had left behind.

For three seasons I was hooked with Veronica Mars. A teenage private female eye who could solve cases while attending school. During which time she solved the case of her killed her best friend Lilly Kane and who purposely made the bus go off the cliff and more importantly, after lots of teasing Veronica and Logan had there first kiss. The bad boy came through and the 09er got with the girl from the wrong side of town. Through ups and downs half way through season 3 they went there separate ways but I was always routing for team Logan.

When Kickstarter came up with the plan to make the all-anticipated movie which would make all of our lives complete - people from all around the world donated and in record time they had the money in less than half a day. The movie came out to limited cinemas overseas and the only way NZ could see it was through downloading. Luckily my mum had just won a 6 week trial with Quickflix that she did not want and viola, my husband and I were sitting in front of the TV waiting excitedly through the xbox to watch the movie.

All of the original characters and cast came back. Past stories were mentioned and character backgrounds were visited. Ten years since they left our lives and we pick up as Veronica is having a job interview wanting to become a Lawyer. She is (unfortunately) still with Piz. A phone call changes the course of everything and she is running back to Neptune to help Logan who has been accused of murdering his ex-girlfriend. During this Neptune High is also having a ten year reunion where she attends and catches up with Weavil, Wallace and all of the other students from her past.

Maybe its because I have been wanting to see this for so long, but it didn't live up to all of the hype. It was watchable but it lacked something. It was great seeing everyone again but the spark has gone. Logan definitely is not as cute as he was and has lost his puppy fat so is just very slim. Could be they have all aged ten years but didn't seem as vibrant.

If you were a V.Mars fan you have still got to watch it. It finishes in a way which is open for another movie or just a new tv show. The epic love story is still open to the future and no matter what happens I will be waiting holding my breath till she finally gets that ring on her finger and becomes Mrs Echolls!

According to the legend of the Shangaan, white lions are the messengers of the gods, but it has been years since one has been seen in their remote African valley. When a white lion is miraculously born into that valley, a young Shangaan named Gisani, finds himself destined to protect this rare and magnificent creature at all costs. This young lion, that will be known as Letsatsi, is cast from his pride and forced to embark upon a perilous ... more...