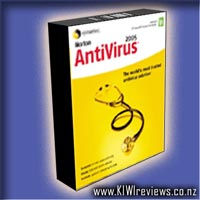 Symantec's Norton AntiVirus 2005 is the world's most trusted antivirus solution.* It removes viruses, worms, and Trojan horses automatically, without interrupting your work. New Norton Internet Worm Protection blocks certain more sophisticated worms (such as Blaster and Sasser) before they enter your computer. Norton AntiVirus can also detect spyware and other non-virus threats.

A few years ago I did an unofficial comparison between some of the market leaders in anti-virus for the home market. Norton AntiVirus (NAV) came in a VERY tight second place. What stopped it from being #1 was that it threw up a false positive on some MSWord macros that weren't viral in nature, but did make some system resource calls for printing. The other package that was chasing the #1 spot correctly identified the macros as harmless and moved on.

It seems that false-positives are still the only hiccup for NAV, since that was the only fault I found on the 2005 version too. Considering the cost of AntiVirus protection these days, NAV does a spectacular job still, and now offers features unheard of a few years ago. With the ability to block network-access worms, script-blocking, and much-improved email scanning, this has become a premiere option for the home user who wants to give quick, effective protection to their PC.

I was also impressed by the high level of protection offered against intrusion by Instant Messenger attachment. You can now click ACCEPT with a very high degree of assurance that whatever is coming down the line is either safe, or is going to be analysed and stomped on if it's nasty.

The enhanced pre-install scanning is also a wonderful feature that leads the way. When I tried to install another AntiVirus package onto an already-infected PC, I found the worm was smart enough to detect that trouble was on the way and it aborted the install, repeatedly. This is the degree the very-smart-but-totally-stupid virus-writers will go to these days. NAV doesn't beat this problem, it grinds it into the dirt and jumps up and down on it. On the test machine, it seemed to ignore the abort commands being hurled at it by a panic-stricken virus, installed, scanned, found and destroyed the offending bug, leaving a clean machine and a happy user.

Overall, if you are a home-user and want to make sure your PC is safe and sound, NAV '05 is the way to go.