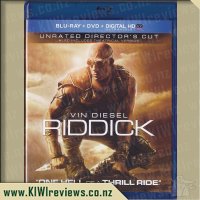 Riddick is a 2013 British-American science fiction film on DVD, the third instalment in the The Chronicles of Riddick film series. Produced by and starring Vin Diesel.

The infamous Riddick has been left for dead on a sun-scorched planet that appears to be lifeless. Soon, however, he finds himself fighting for survival against alien predators more lethal than any human he's encountered.

The only way out is for Riddick to activate an emergency beacon and alert mercenaries who rapidly descend to the planet in search of their bounty. The first ship to arrive carries a new breed of merc, more lethal and violent, while the second is captained by a man whose pursuit of Riddick is more personal. With time running out and a storm on the horizon that no one can survive, his hunters won't leave the planet without Riddick's head as their trophy.

To be honest I do not remember much of the other two movies before this one. I seem to remember he had to wear gasses cause his eyes are funky and the sun can hurt them, so I was a little confused as to why we got to see his shiny eyes the whole time. He occasionally wears those goggles but mainly its his natural shiny white eyes.

Riddick has been left on a planet presumed dead, but when he notices that nature is against him sends a beacon off to let bounty hunters know he is in fact alive. They land and he leaves a note saying leave a ship and leave alive in the other one. His arrogance shows no sign of slowing down. Naturally the bounty hunters want to catch/kill him both for different reasons.

I did enjoy the action in this movie and especially loved him 'keeping his word' and killing the annoying Santana in five seconds. His pet 'dog' was a fun watch and was rather bummed when naturally it was killed. He did get rather tedious at the end with the water monsters and I was bored waiting for it to finish. There were definitly slow parts in the movie but as a whole it was watchable. The special effects were ok. I especially loved the motor bikes. I think the dogs could have been done better and the water monsters resembled scorpions to much and reminded me a lot of Enemy Mine. Over all it was an ok action/sci fi movie.

I wish I could say that this film was a fitting end to the 'Chronicles of Riddick' film franchise, but it appears that there are talks of a fourth, brought on by the great sales from this DVD. Out of the three films released so far, this is my second favourite, behind 'Pitch Black'.

This film is enjoyable, going back to the roots of what made Riddick great; reprising his role as a seasoned killer, capable of mercy, but never given a chance to exercise it. With a bounty upon his head, trapped between mercenaries, and the planets hostile inhabitants, Riddick is in his element. Personally, I enjoyed the film much more before the other characters arrived. It felt raw; a true survivalist story.

The visual environment was well done, with a good mix of colour schemes throughout the film, and good balance of light and dark. There was a little too much CGI for my liking however, and it came off a little corny. All in all it was a simple plot, which worked well, and they didn't spend too much time on backstory; so there were limited references to the 'Chronicles of Riddick' movie.

Vin Diesel does well, and this film is definitely worth a watch. But can they stretch another film out of the series? We'll have to wait and see.

I enjoyed both Pitch Black but wasn't the biggest fan of the Chronicles of Riddick so I was very pleased to have the chance to review the latest in the series. I wanted to see where David Twohy took it next, I wasn't disappointed as it went back to the basics and reminded me more of the Pitch Black I loved!

Riddick begins 5 years on from The Chronicles of Riddick. Riddick finds himself left for dead on a sun scorched planet but soon after arriving he finds himself with bigger problems! Alien predators which are worse than anything he has faced before. The only way to get off the planet is to activate an emergency beacon. however that brings a whole new set of problems though as two ships arrive captained by men who want Riddick dead so they can claim the hefty bounty on his head.

I really enjoyed the storyline and it was an enjoyable watch. Even if your hadn't of seen the other two movies in the series it would of been really easy to follow along. Vin Diesel does a wonderful job as Riddick and even though he is the bad boy of the movie you find yourself rooting for him. You want to see him succeed in escaping the planet.

Right from the start of the movie it is action packed and the special effects are awesome. Riddick himself looks pretty spectacular. The planet has lots of interesting creatures lurking around, some a lot worse than others. The CG is very well done. Thrown in there's also a lot of blood and gore which every good horror/sci-fi movie needs.

I would recommend checking out Riddick even if you didn't enjoy the second one in the series you will love the third!

It is tradition for all young witches to leave their families on the night of a full moon to learn their craft. That night comes for Kiki, who follows her dream and embarks on the experience of a lifetime.

With her chatty black cat, Jiji, She flies off to find the perfect spot in a faraway city. There, a bakery owner befriends Kiki and helps her start her own business: A high-flying delivery service.