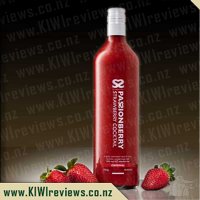 Disclosure StatementFULL DISCLOSURE: A number of units of this product have, at some time, been supplied to KIWIreviews by the company for the purposes of unbiased, independent reviews. No fee was accepted by KIWIreviews or the reviewers themselves - these are genuine, unpaid consumer reviews.
Available:
via Online Store and selected quality liquor stores nationwide.

No mess - no fuss! Impress your party guests by simply chilling, pouring and serving PASSIONBERRY straight from the bottle! Or blend with ice and your favourite mixers to create luscious signature cocktails of your own!

*(9% pure distilled alcohol in every bottle).

I have seen Passionberry cocktail advertised in a few places and I have been meaning to get around to trying some so when the chance to review it come up I was very excited.

First taste I tried it straight from the bottle, straight away you get the hit of strawberries and alcohol. While I really enjoyed it I found it not quite as sweet as I like. I added a little lemonade though and it was perfect for my taste. I then tried it with a little sparkling wine which was also very tasty. The following night I decided to try it the way they recommend and blended some with ice, once again it was yummy but not quite to my taste.

When I got the bottle I was also really excited about other things I could make with it. First was homemade ice-cream, I lightly whipped a cup of cream, added a little icing sugar and Passionberry cocktail to taste. I threw it all together in the ice-cream maker and the result one very tasty strawberry ice-cream - with just a touch of alcohol. My husband who is often fussy when it comes to home made ice-cream also really enjoyed it.

With the rest of my bottle I decided to make individual Passionberry cocktail cakes. I decided to team it up with a white chocolate icing. The results was very pretty looking cakes which provided a lovely explosion of strawberry when you bit into it! Teaming it up with white chocolate just added to the taste. They were a hit with everyone who tried them and I have already been requested to make some more!

I am very keen to give the other flavours in the range a try and will be buying more not just to drink but to use in baking etc as it gives a perfect twist to baking. I recommend anyone who likes strawberries to give it a try.

When I got home from work after quite a stressful day I found a box delivered to my doorstep... I was so excited to see it was a bottle of Passionberry Strawberry Cocktail. It was such perfect timing, it was just meant to be!

Passionberry Strawberry Cocktail is an awesome new low calorie cocktail brand made in New Zealand and it contains 50% real New Zealand strawberries. This is fantastic for all those people wanting to support the local New Zealand market (let's face it, in New Zealand we are all locals).

The first drink I decided to try with this was just to mix it with ice in a blender to make a slushy type drink. I poured in half a tray of ice cubes and half the bottle of Passionberry and then whizzed it for a few minutes until all the ice was broken up. I served it in two nice big cocktail glasses and my husband and I enjoyed a sneaky weekday drink. When I first read about Passionberry I thought it might be another "too sweet" ready to drink mix. Oh how wrong I was. The first thing you can smell and taste is real strawberries, then you get a little bit of an alcohol taste (nothing too strong at all) and then it have a nice strawberry after taste.

The second drink I tried was Passionberry mixed with lemonade. I found this was the perfect way to sweeten up the drink and also thin out the pulpiness. I actually preferred this drink to the slushy mix as I like more of a sweet taste and the base product with just ice wasn't sweet enough for me personally.

After my Passionberry and lemonade I decided I still hadn't had enough of this unique cocktail and since it was after dinner I decided to try it over ice cream. This was delicious! I used the only ice cream we had in the freezer, Cookies and Cream, and it was great but I think next time I'll be getting some vanilla ice cream so I can get the full flavour of the Passionberry Cocktail mix.

The one thing I should mention about Passionberry is that it does have quite a bit of pulp so if you aren't into that sort of thing then I'd recommend mixing it with some ice, soda water or lemonade to reduce the texture.

I can see myself drinking this next summer by the pool, enjoying the summery taste of strawberries in the sunshine. It really is an original flavoured drink which I would recommend everyone try at least once. There are many different uses for this product so I'm sure you'll be able to find your favourite one

I was very excited to get my hands on a bottle of Passionberry cocktail mix in this round of review goodies. I have seen it advertised mainly on Facebook, and was very curious. I had some expectations on the flavour, and I have to say I was quite wrong! The first thing we did when we got this bottle home, was try a small amount straight just to see what the base product was like. I was expecting this to be fruity and pulpy which it is. There are a lot of seeds. But the flavour was a little tart, and there was no hint of sweet at all. It is lightly carbonated and so I could taste that kinda alcoholic soda water and tart strawberry pulp.

As far as drinks go, I could drink it. It wasn't unpleasant, but it wasn't a drink I could see myself ordering at the bar either in it's base form. My husband said that it tasted like astringent and he couldn't finish his glass. Everyone's taste buds are different though. The next thing I did was mix this with lemonade, cold mint tea and a touch of feijoa and honey liquer. I made this up in a punch bowl and offered this to hubby. He drank his whole glass of this and said that it tasted better as part of the overall cocktail I made. I agreed, you could tell that the Passionberry was there, and it did cut some of the sweet from the other ingredients. I had a couple of glasses of the punch and found it very easy to drink.

With the last of my bottle, I made some cupcakes. The cupcake recipe I had was for champagne originally. I added this Passionberry mix into the bowl with the oil and milk. The mixture curdled and then I added the rising agents. This made the mixture froth, and overall made for a dense but moist cupcake. I also added a tablespoon of the cocktail mix to my cream cheese icing. The taste was delicious. I found this a very versatile product. I wouldn't recommend drinking it straight, but it makes a great fruity addition to cocktails. The other flavour combos in the range sound great and I will keep an eye out for the Coconut and Vanilla ones.

I was excited to see this come up for review as I had seen this on Facebook a few times (and even tried to win one, but no luck) so I was really happy to get a bottle to review.

I had a big problem arise though when it started to fizz out as soon as I opened the bottle, I attempted to use my usual tricks to stop it from flowing out but no luck, in the end I had to tip it all out into a pot and then pour it back into the bottle, meaning no slight fizz to the drink and just a carbonated taste. Had a shot glass worth of it to start off with and even though it wasn't the best taste, it was nice enough that I was planning what to do with it.
NOTE: The bottle MUST be stored in a refrigerated environment at all times. This bottle 'outgassed' because it was not stored properly. The outgassing is not a product fault - it is caused by improper storage.

My first item with it was making something similar to french toast but the bread was dipped in a mixture of egg yolks and cooking cream then using water, sugar and some of the Passionberry cocktail I made a sauce for pouring over once the toast was cooked. Whilst my toast was too creamy the sauce was nice and there was enough left over that I was able to pour the sauce over some of my Rufus Teague Blazin' Hot sauce cake and then some over my ice-cream.

I then made a very basic cheesecake, using cream cheese, sour cream and sugar for the middle and butter and shortbread biscuits for the base. I then made a jelly with the Passionberry strawberry cocktail and mixed it through, then let it set. My kids loved the cheese cake and wanted more, my husband and I loved it and wanted more, my mum liked hers and when I gave her and a friend a slice the next night I got a call on the intercom asking what the jelly was made out of, obviously it was a hit.

Other than drinking this straight I decided to mix some of this (minus the pulp) with some medium white wine which created a really nice, mellow drink that I enjoyed and would have done again had I had any more wine left. Having this on its own it has a bit of an after taste, not sure if this is due to loosing all the gas at the start or what... but it's flavour isn't so bad that I'm not drinking it, it's just not what I would have expected from it, possibly needed to be a bit sweeter as I'm finishing it more because it is here rather than really liking it.

I would be keen to try the other flavours in the range but I'm not in a hurry to buy my own bottle of this due to not really enjoying the taste of it on it's own and then getting to the end of the bottle, a bit too much pulp for me.

The creative minds behind "Kaboom", "Carnival" and the epic Kiwi showdown of "Jono v Ben" now bring you a fruity Guarana hit with "Spiked Punch" - available in stores now!