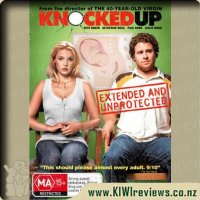 Allison Scott (Heigl) is an up-and-coming entertainment journalist whose 24-year-old life is on the fast track. But it gets seriously derailed when a drunken one-night-stand with slacker Ben Stone (Rogen) results in an unexpected pregnancy. Faced with the prospect of going it alone or getting to know the baby's father, Allison decides to give the lovable layabout a chance.

An overgrown kid with no desire to settle down, Ben learns he has a big decision to make with his kid's mother-to-be: will he run or stay? Courting a woman you've just Knocked Up, however, proves to be difficult when the two try their hands at dating... and more. As they discover more about one another, it becomes painfully obvious that they're not the soul mates they'd hoped they might be. With Allison's sister Debbie (Mann) and hen-picked brother-in-law Pete (Rudd) the only parenting role models the young lovers have, things get even more confusing.

Should they raise the baby together? What makes a happy lifetime partnership after all? A couple of drinks and one wild night later, they've got nine confusing months to figure it out...

I think this movie is fantastic. It makes you laugh in that silly way only a non-brainer of a movie can. A one night stand ends up creating the miracle of life that neither are ready for. I loved when she starts vomiting at work and her work mate is speaking on the phone saying 'wow she doesn't know she's pregnant' was rather well done.

Seth does a fantastic job as being the awkward, drug taking, annoying father to be. It works though and you really don't mind it. Katherine plays little Miss Perfect and I really like her. My only real complaint about the movie was Paul Rudd and Leslie Mann - they were just so annoying. Leslie is involved with the director in real life and felt she had way too much screen play. Her character was over the top and brought nothing to the comedy of the movie. Hated the scene where taking pregnancy tests so she starts taking them as well - seriously why?? It was just silly and oh the continuous fighting and put downs just gets to you.

I was pregnant when first saw this movie and didn't have a clue what to expect. I was in tears while she was in the bath having contractions and your heart melts as he tries to find a doctor to help her. Well worth a view especially if you do not have kids, are pregnant or just really need a no brainer to unwind to.

A romantic comedy about a one night romp, which un-protected, leads to a baby on the way.

Allison goes out for drinks one night, meets Ben and they end up back at her place (a sleep out on her sisters property), the next morning they part ways expecting not to meet up again but fate has other plans and Allison ends up pregnant. What follows is a roller coaster as they try to learn about each other and prepare for the new life. There's comedy galore as they try to get along with each other and each others friends/family and some sweet scenes between the two.

Going to get it out of the way, Jonah Hill is sooooo annoying, argh!

but other than that the acting is good, the friends of Ben are sub-par, dim witted, idiotic people who like naked women and drugs, they are very annoying (which one assumes they are meant to be) but they are annoying to the point of putting me off watching this again (well, them and Jonah Hill). The main cast though do a good job, the script is nothing amazing and there are some jokes that just fall flat but otherwise a fun movie.

A sweet ending to a fun Friday night in.