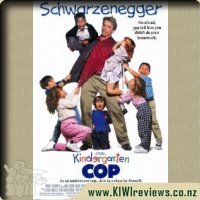 John Kimble is a tough city cop who's been on the trail of drug dealer Cullen Crisp for years. He finally tracks Crisp down but it seems the only person that can testify against him is his ex-wife. The problem is she's disappeared and all Kimble knows is the name of the school in Oregon where her son attends. When things don't quite go to plan, Kimble finds he has to go undercover on his toughest assignment yet - Kindergarten teacher!

Arnold Schwarzenegger plays John Kimble, a cop who has spent years chasing a criminal by the name of Cullen Crisp. When he finally gets Crisp, he has to find all the money Crisp that stole, only problem is that his ex-wife took it and fled to a small town with their son, changing their names in the process. To find them, Kimble ends up posing as a kindergarten teacher, and hilarity ensues. I still find the same jokes funny today, plus more due to the fact that I'm obviously older than when I watched it as a kid.

Arnie does a great job as the cop who is not a kid person, trying to be a kid person, whilst also trying to catch a really nasty criminal. I love the kids in this movie, they are utterly adorable, and there's some awesome moments with Arnie trying to organise the kids and get them to listen to him, which involves drills and marching in lines. Throw in some action at the end of the movie and a little bit of romance and you have a really fun movie.

Lt. Col. Bill Cage is an officer who has never seen a day of combat when he is unceremoniously dropped into what amounts to a suicide mission. Killed within minutes, Cage now finds himself inexplicably thrown into a time loop - forcing him to live out the same brutal combat over and over, fighting and dying again - and again. But with each battle, Cage becomes able to engage the adversaries with increasing skill, alongside Special Forces ... more...