« How the Grinch Stole Christmas review 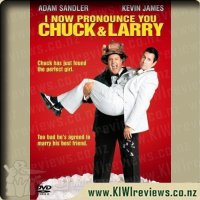 They're as straight as can be, but don't tell anyone.

Chuck Levine and Larry Valentine are the pride of their fire station: two guy's guys always side-by-side and willing to do anything for each other. Grateful Chuck owes Larry for saving his life in a fire, and Larry calls in that favour big time when civic red tape prevents him from naming his own two kids as his life insurance beneficiaries. But when an overzealous, spot-checking bureaucrat becomes suspicious, the new couple's arrangement becomes a citywide issue and goes from confidential to front-page news. Forced to improvise as love-struck newly-weds, Chuck and Larry must now fumble through a hilarious charade of domestic bliss under one roof. After surviving their mandatory honeymoon and dodging the threat of exposure, the well-intentioned con men discover that sticking together in your time of need is what truly makes a family.

Yes, there are plenty of jokes about being homosexual and similar in this movie, but it also aims at reminding you about tolerance and acceptance.

Gay jokes have always been staple of Adam Sandler comedies but in this movie the characters making homophobic remarks and jokes are seen as ignorant and unaware. Yes there are stereotypes present, though most of them are stereotypes that the characters believe to be true and it does have the characters learning to be more accepting of others. Most of the jokes that don't work in Chuck and Larry is because they just don't pace well.

The acting isn't anything amazing but everyone does a good enough job, Adam Sandler's usual friends pop up in the movie such as Rob Schneider popping in as the man who marries Chuck and Larry, and performs another marriage later on in the movie, his role though was rather annoying this time around and dragged on a bit too much. My favourite quote from the movie is "And most importantly, they showed us that no matter whom we choose to love, be they heterosexual, homosexual, asexual, bisexual, trisexual, quadrisexual, pansexual, transexual, omnisexual or that thing where the chick ties the belt around your neck and tinkles on a balloon, it has absolutely nothing to do with who we are as people."

Not hugely great but still a bit of fun with a good moral to the story.

A thriller centered on the threat posed by a deadly disease and an international team of doctors contracted by the CDC to deal with the outbreak.