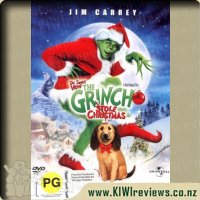 Based on the book by the famous Dr. Seuss. Inside a snowflake exists the magical land of Whoville. In Whoville, live the Whos, an almost mutated sort of munchkinlike people. All the Whos love Christmas, yet just outside of their beloved Whoville lives the Grinch. The Grinch is a nasty creature that hates Christmas, and plots to steal it away from the Whos which he equally abhors. Yet a small child, Cindy Lou Who, decides to try befriend the Grinch.

The Grinch hates Christmas, no surprises there. Will he learn that there is more to Christmas than just presents in this Christmas tale? This movie will perhaps appeal to younger children, but teens and adults might fight it just a little bit mundane, irritating, maybe annoying lol

Jim Carrey is one of the worlds best known comedy actors, and generally he is super funny to watch. Perhaps I was not in the mood when I watched this, but I just found myself bored, and wondering off to do other thing. For a family movie it is possibly just a little bit to much doom and gloom haha sure there is a happy ending, and a cute little girl determined to prove to the grinch that the world is not all bad, but prior to that happy ending, there is not a whole lot of happiness to be had in this movie, which I am assuming is the reason my kids did not like it a great deal.

The movie uses lots of special effects, trick photography, and really awesome huge sets to create Whoville, the little town at the bottom of the mountain that holds the cave the grinch lives in. Whoville is inside a snowflake, and is where all the Who's live. The grinch lives in a cave on the garbage mountain. When the happiness of Whoville becomes to much for him he decides to sneak down and steal their Christmas presents, and so begins the movie.

I dunno, it just doesn't seem to be a very appealing movie to me haha

Inside a snowflake like the one on your sleeve, there happened a story you must see to believe.

In the land of Whoville everyone loves Christmas and count down the entire year until that wonderful time. However just outside Whoville lives the Grinch, a green hairy twisted creature that hates, and always has hated, Christmas and was rejected by the Who's as a child. A young girl from Whoville sets out to befriend the Grinch and help him find his love of Christmas but, when it goes wrong early on, the Grinch becomes even more rotten and plans to ruin it for everyone. How the Grinch Stole Christmas delves into the Grinch's past to find out just what made him hate Christmas so much.

Jim Carrey really does carry the movie. The supporting cast is really good but hidden too much under the costumes and make up. Taylor Momsen is cutsey cute as Cindy Lou Who but a bit too syrupy in her role, for the kids it is ok on the whole but for the parents it can get a bit too much. I do like though, that when Momsen sings her song she doesn't have a perfect singing voice, adds well to the movie as a whole.

A fun movie, a great reminder that Christmas is about family more than anything.

Set in a near-future, militarized world marked by closed borders, virtual labour and a global digital network that joins minds and experiences, three strangers risk their lives to connect with each other and break the barriers of technology.