Horton Hears a Who! review 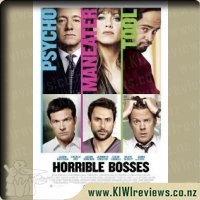 Nick hates his boss, mostly because he's expected to work from before sunrise to after sunset and his boss, Mr. Harken, calls him out for being a minute late and blackmails him so he can't quit. Dale hates his boss, Dr. Julia Harris, because she makes unwelcome sexual advances when he's about to get married. But Dale is on that pesky list of child offenders so he can't quit. Kurt actually likes his job and his boss, well, up until his boss dies and the boss's coked-out, psychopathic son takes over. But who would be crazy enough to quit their jobs in such poor economic times? Instead Nick, Dale and Kurt drunkenly and hypothetically discuss how to kill their bosses, and before they know it, they've hired a murder consultant to help them pull off the three deeds.

This is a film that I was a bit skeptical of. It seemed like it would be another over the top loud comedy as we have come to expect from "It's always Sunny in Philadelphia", but surprisingly it worked well. While Charlie Day did play a less than intelligent loud-mouthed character, his two co-protagonists evened it out, so that it was not over the top.

Jennifer Aniston playing a sexually aggressive dentist was just wow. That was just one hell of a well written, deceptive, boundary breaking character role and she cinched it. Could not think of a better choice of actress. I didn't know who the other two bosses were (I resisted looking at the DVD cover) and I was not excited to see Colin Farrell. As soon as you see his character, and the personality of his character's father, then you get that predictable element that is hard to shake.

Kevin Spacey (despite Jennifer's amazing performance) was the highlight for me. I originally wrote him off in this film. after his first few scenes, I wasn't really all that interested, but then he started to fit in the role, and it became him. Kevin and Jennifer were incredibly convincing. "Gregory" was a great addition too.

The actual plot was pretty interesting; it had it's fair share of celebrity appearances, but most importantly it didn't always follow the predicted path. Even the ending kind of spiralled out of control in a fun way. Some of the comedy was slapstick comedy, but for the most part it kept itself to some pretty original material, and kept me entertained.

Murder. Car chases. Scandal. Conspiracy. Blackmail. Revenge. All of this and more happens in Horrible Bosses.

You would think that with everything going on in this movie it would be a drama or action movie, instead it is a rather black comedy. We have Nick who's boss has a go at him for being 2 minutes late and expects him to work overtime everyday, Dale who is being sexually harassed by his boss and Kurt who loves his boss, but then his boss dies and his sleazy son takes over the business. They decide to kill each others bosses and what follows is total hilarity.

Everyone does a really good job in their role, fully believable and convincing, sometimes you can get someone who is a little too silly or too over the top but everyone played their roles wonderfully. There is such a mixture here from things going wrong due to drugs, an unplanned murder, a stake out gone wrong (or right depending on what your point of view is) and so on. My husband and I have seen this many times and even my mum has seen it and thoroughly enjoyed it.

This is a hilarious movie, if you like black comedies then this is a must watch.

Get ready for the Daddy of all family comedies!

When it comes to raising their kids, Dusty (Mark Wahlberg) and Brad (Will Farrell) finally have this co-parenting thing down. That is, until Dusty's macho dad (Mel Gibson) and Brad's sweet-natured father (John Lithgow) come to town, throwing the whole family into complete chaos.

As old rivalries create new problems, Dusty and brad's partnership is put to the ultimate test in this 'hilarious and heartwarming' comedy that gives new meaning to the term 'blended family'.