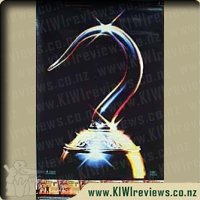 Peter Pan (Williams) has grown up to be a cut-throat merger and acquisitions lawyer, and is married to Wendy's granddaughter. Captain Hook (Hoffman) kidnaps his children, and Peter returns to Never Land with Tinkerbell (Roberts). With the help of her and the Lost Boys, he must remember how to be Peter Pan again in order to save his children by battling with Captain Hook once again.

I love the twist on Hook, Peter Pan left Neverland and grew up forgetting he was ever Peter Pan. Robin Williams does a wonderful job in the role of Pan and watching him travel through Neverland rediscovering who he was is very amusing. Dustin Hoffman also did a wonderful job in the role as Hook it was as he was made for the role. In fact the casting was all done perfectly the only let down for me was Julia Roberts in the role as Tinkerbell for some reason it just didn't seem quite right.

The whole movie is just a delight and takes you on a magical journey. I find it reminds people that sometimes it's good to relax and go back to having fun now and then! It certainly is a different twist on a much loved story and would be well enjoyed by any Peter Pan fan.

What if Peter Pan had left Neverland and grown up in our world, married, had kids and gotten a job?

Hook is a really fun film, it was definitely very imaginative and creative story wise. Robin Williams and Dustin Hoffman are awesome together, I really, really enjoyed their performances. Julia Roberts does a good job as Tinkerbell, but I don't like her as much as some of the other characters. Everyone playing the Lost Boys do a great job, they still have their innocence where necessary, their confusion over Peter Pan being a dreaded adult and their fun in adventure is infectious.

Hook is over all a good film that I would recommend to people. It's not at all a bad film, it has good drama in it along with great comedy. I love the dinner scene with Peter and Rufio, it's such fun and shows how important imagination is, no matter what age you are. Dustin Hoffman plays Hook brilliantly, he is nothing but the fearsome Hook in this movie, Bob Hoskins is wonderful as Smee (and I love that he keeps on playing Smee, a signature role for Hoskins).

If you like the story of Peter Pan, Wendy and Neverland then this is a fun movie to watch, it's a great what-if story.

Score: 8.9
Product reviews for listing 6089: Once Were Warriors
Directed by Lee Tamahori