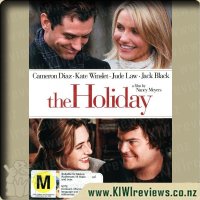 The Holiday is a 2006 American romantic comedy film starring Cameron Diaz and Kate Winslet as two lovelorn women from opposite sides of the Atlantic Ocean, who temporarily exchange homes to escape heartbreak during the holiday season. Jude Law and Jack Black co-star, with Eli Wallach, Shannyn Sossamon, Edward Burns and Rufus Sewell supporting.

After bad bouts of man trouble just before the holidays, Amanda Woods (Diaz) and Iris Simpkins (Winslet) are desperate for a change of scene. Traveling in opposite directions (Diaz to London, Winslet to Los Angeles), each finds herself alone in an unfamiliar town, but neither remains a stranger in her new surroundings for long. Cameron Diaz and Kate Winslet join an all-star cast that includes Jude Law, Jack Black, Eli Wallach, Ed Burns and Rufus Sewell in The Holiday, writer-director Nancy Meyers' latest take on the strange ways of love, and the high price of neglecting your own heart.

There is plenty of laughs involved in here, I love the voice over for Amanda, she is a movie trailer editor, and so we have the movie trailer voice over guy doing a voice over at times for Amanda and what is going on, I found that rather fun. There are some rather funny parts but this is a movie that focuses far more upon the characters and their growth and a little bit of 'a fish out of water' thrown in there as Amanda goes from Los Angeles to London and Iris from London to Los Angeles.

I really like how this is set up, Iris is in love with the wrong man (he cheated on her, uses her etc.) and trying to get over him, Amanda has just kicked out her boyfriend for cheating on her and wants to get away for the first time in a while. Throughout the two women's main stories are a couple of small, intertwined stories from Iris' brother, Amanda's co-worker and an elderly man who lives down the road. Everything has been done so well that even my husband enjoyed it.

This is a fun movie and is now a regular of mine to watch every Christmas.

In the midst of a global crisis, the USS Alabama receives unconfirmed orders to launch its nuclear missiles - signaling the start of World War III! The tension escalates as the sub's respected commander (Hackman) and his brilliant executive ... more...