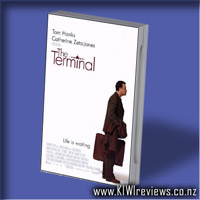 An Eastern European visitor (Hanks) becomes a resident of a New York airport terminal when a war breaks out and erases his country from the map, voiding his passport.

Through hardship and adversity, he stands strong, finding his way past, around, or through every obstacle he encounters. Even those placed in his path by the authorities.

And what IS in the old Planters Peanuts tin he carries with him?

Inspired by the story of Merhan Nasseri.

I really wasn't too keen on watching this at the beginning. i couldn't see how a movie set in an airport for the entire movie would interest me, HOWEVER ... I loved this movie. I felt sorry for the poor guy. He found ways to eat, he made himself a great little Place to sleep and he fell in love. i loved the ending and what he did for her.

Having been caught up in official red-tape at airports during my 'Big O.E.' days, I can sympathise with Victor Navorski's plight... but not to the same degree he has suffered.

From the very start, I was able to 'attach' to the Navorski character and was caught up in every trial and tribulation he encountered. I was heartened by the small acts of kindness shown to a lost traveller, having been one myself, and know that receiving such generosity from strangers can renew one's faith in humanity, and the lack of them can turn one into a nervous wreck.

The sheer practical nastiness shown by the airport manager would have made a soul-mate out of Machiavelli himself, however the raw effects of his machinations were tempered, and sometimes outright countered, by the actions of the midle- and lower-ranks staff such as the security force and the cleaners and porters, as well as the staff of the various retail outlets.

When, near the end of the movie, Victor has a chance to venture out into New York, the effect clearly showed what an effect an honest heart and clean soul can have on a jaded community such as grows in a mall/airport environment... EVERYONE was out in force to show their support... it was almost enough to bring me to tears.

Overall, the story is filled with 'human moments' where a simple act of kindness flows and grows, making the viewer think about their own actions in day-to-day life. It was a real eye- and heart-opener... and that is rare in today's entertainment. Not often can we sit down and relax and be shown the true nature of ourselves in such clear and uncomplicated terms. Though I found a few tiny bits of it a bit unrealistic, the movie as a whole was wonderful, and I look forward to watching it again one day with someone special beside me.