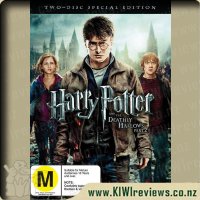 "Harry Potter and the Deathly Hallows - Part 2," is the final adventure in the Harry Potter film series. The much- anticipated film is the second of two full-length parts.

In the epic finale, the battle between the good and evil forces of the wizarding world escalates into an all-out war. The stakes have never been higher and no one is safe. But it is Harry Potter who may be called upon to make the ultimate sacrifice as he draws closer to the climactic showdown with Lord Voldemort.

It all ends here.

The end is near, the conclusion of a series and some answers finally given.

We have laughed, cried, looked on with awe and inspiration and cheered for good to triumph over evil. The race is on to find the final horcruxes and then we have the huge final scene at Hogwarts where the final battle takes place. Right from the start I was hooked, I knew how this was going to end but it still had me enthralled and sitting on the edge of my seat, grinning when love was found and crying when long running characters died.

Some of the characters that have been there all along step up and have a huge part in this movie, from Nevil to Professor McGonagall goes to war, there are many moments in which the supporting cast take the lead for a moment or two but it is still, naturally, Harry's story throughout the movie. I love that they stayed true to Snape's story, at times just as important as Harry's story, and I must admit I teared up a time or two.

Of course it wasn't perfect if you compare it to the book but it was a really well done movie, the defending of Hogwarts at the end was amazing and overall a well done end to a series.