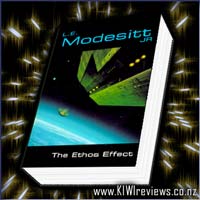 Disclosure StatementFULL DISCLOSURE: A number of units of this product have, at some time, been supplied to KIWIreviews by the company for the purposes of unbiased, independent reviews. No fee was accepted by KIWIreviews or the reviewers themselves - these are genuine, unpaid consumer reviews.
Available:
February 2005

Following the unfortunate, yet unavoidable destruction of a civilian liner during a short but brutal space battle, Commander Van C. Albert is reassigned to commanding an older ship on dead-end missions.

After another reassignment, into the diplomatic corps, Van finds himself in hospital, then shipped home for early retirement. Suddenly things are no longer safe for Van.

But then he takes command of a starship for a private foundation and finds himself closer to the action than ever before. For this foundation, IIS, has far-reaching influence and their orders set Van and his crew in the path of a deadly interstellar battle that could spell destruction for every human world...

Every ethical person has morals, but not every moral person has ethics. Ethics are a set of guidelines we impose upon ourselves, somewhat shaped by our life experiences, the governing rules of the society we live in, and the strength of will inherent in ourselves. Morals are imposed from without, by the world around us.

Is it moral to kill another person? Under the right circumstances, yes. It is morally correct to kill in defence of one's life and those under your protection such as family and friends. Is it moral to kill that person if they are not directly attacking you or your kin? Not really... in the society in which I live.

However, it COULD be ethical to kill that person if you firmly and unequivocally believe that to do so would be in the greater good, for example a serial killer on the loose, a mass-murderer or dictator-out-of-control. How would the word have been different if Hitler had been successfully assassinated earlier in his term, before the war escalated out of control? Or Napoleon? The list is almost endless really.

This story explores the dichotomy of Ethics vs Morals, Rules vs The Right Thing, in a most unusual way. Here we see one good man lost in the crowds of general scum running the military and planets of a multi-stellar human civilisation. In an environment with 4 main human factions, and a number of smaller independent planetary societies, all warring it out for domination... and the guidance of a mysterious alien species, one man can make all the difference, with the right tools.

"Give me a lever long enough, and a fulcrum to pivot from, and I will move the world" - it's a brilliant quote, and I leave it those interested and intellectual enough to find it's source. The man who spoke those words could not have known how long they would echo down the halls of time, and they still give rise to serious thought in the minds of many smart people. This book is a lever long enough, and when you become the fulcrum, your world will move, but only you can control in which direction.

Overall, I loved this book, but found it profoundly disturbing in places. I can't say I agree with all of the conclusions arrived at by the main characters, and I certainly don't agree that the best way to deal with a rampant religious civilisation is to nuke an entire solar system, but I will admit it has made me take a closer look at my own moral standards and the ethical ramifications of my actions in day-to-day life. If you can honestly assess your behaviour and moral code, and still stand proud, then this book will have been a success.

Hush, little baby, and go to sleep, Mama's going to give you a woolly sheep...' Regarded by some as the mother of children's publishing in New Zealand, it is fitting that Joy Cowley has penned this warm hearted Kiwi version of a traditional lullaby, with words in both English and te reo Maori. From sheep to kowhai flowers, and from paua shells to silver ferns, this special picture book will be a treasured addition to any home ... more...