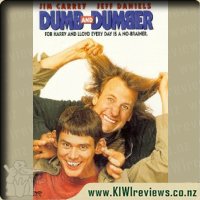 A pair of dumb friends named Harry and Lloyd set out on a cross country trip to return a briefcase full of money to its rightful owner, a beautiful woman named Mary Swanson. However, the duo are unaware of a bigger conspiracy involving Mary and the briefcase, and a pair of criminals involved in the conspiracy attempt to chase Harry and Lloyd down for the briefcase.

Dumb and Dumber staring Jim Carrey and Jeff Daniels as Harry and Lloyd. Two super dumb friends who set off on a cross country adventure in an effort to return a whole lot of cash to a very beautiful woman. Little do they know there adventure is not as simple as they think, and there is a conspiracy surrounding the briefcase of cash.

Possibly the funniest thing about this movie is that it is so dumb, it is funny. The title is a fairly accurate description of the movie; Dumb and Dumber. Jim Carrey and Jeff Daniels both play dumb extremely well, possibly even to well. And as annoyingly dumb as it is, you really can not help but laugh in the midst of shaking your head.

Dumb and Dumber is most definitely not one of my favorite movies, but it is still a good one to watch when in need of a laught. The plot is pretty lame, the acting from some of the cast perhaps a little mediocre and there is nothing about it that makes you go 'wow awesome'. In fact long story short, it is just a movie. A funny but dumb movie. And as dumb as it is I must confess I have watched it several times, and yes I laugh every time I watch it *shakes head*

The name of the movie should have given me a clue, it really was a stupid movie but it made me laugh so that is good. I can't believe some of the situations that Harry and Lloyd find themselves in, one of the funniest would be the incident with the laxatives (you could imagine that happening).

The criminals must have been even dumber than the friends who thought that they had to return a briefcase and the lengths they would go to try and get the briefcase back.

I haven't watched the movie in years and can't see myself watching it again unless I really need a laugh. I really don't know how the actors can do such stupid things and not feel like fools and better yet not burst out laughing, I can imagine that many scenes had to be redone for this exact reason.

The writers have to be praised for some of the situations they managed to include in the story. Life isn't always serious and it is great to have things or people to laugh at.

I might let my kids watch this one day, if I can find it to hire at the time as I would never own this on DVD. A good movie to tickle your funny bone but don't expect anything serious.

If you watch this movie expecting there to be something smart going on then don't bother. Dumb and Dumber is a stupid movie from start to finish and is happy to be such a movie.

There is not a slow moment in the adventures of Harry and Lloyd, two great but incredibly stupid friends who end up in Aspen, Colorado, trying to return a briefcase to Mary (who Lloyd fell in love with when he dropped her off to the airport). Lloyd's and Harry's adventures are absolutely hilarious to watch, especially their run-ins with the criminals who are chasing them, trying to get the briefcase that Harry and Lloyd do not know is full of ransom cash, and then when they do discover the money, spend it replacing it with I.O.U.'s.

One of the best things about this film is that it never strays too far from reality. There is never anything presented that could not possibly happen in real life. Dumb & Dumber takes a good story, adds some tear-inducing comedy, some endlessly hilarious dialogue - "I guess they're right, old people, though slow and dangerous behind the wheel, can still serve a purpose. Don't you go dyin' on me!", and creates one cringe worth but hilarious movie.

Need to while away a couple of hours and want to laugh over stupid people doing stupid things...? Here's your movie.

The inhabitants of Antonio Island, off the coast of Oregon, are about to unveil a statue honoring the four men (Castle, Wayne, Williams and Malone) who founded their town in 1871. Nick Castle is one of the descendants of the men, and owns a fishing charter company, using his vessel, the Seagrass, for tourism. When his girlfriend Elizabeth Williams returns to the island after spending six months in New York, a bizarre series of events begin to ... more...