Home > Categories > Movies > Sci-Fi > Back to the Future: Part 3 review

« Back tot he Future: Part 2 review

ProdID: 5186 - Back to the Future: Part 3
Directed by Robert Zemeckis 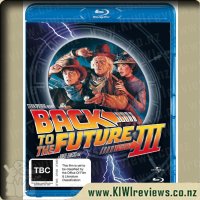 Back to the Future: Part 3 product reviews

In this third instalment of the 'Back to the Future' series, hero Marty McFly (Michael J. Fox) must go back in time to the Wild West of 1885 to rescue his friend Doc Brown (Christopher Lloyd), who he has discovered is due for a fatal showdown with one of bad guy Biff's nasty ancestors. Meanwhile, the good Doc has fallen in love with a newly arrived schoolteacher (Mary Steenburgen).

Part three of the Back to the Future trilogy sees us head back to the Old West.

Marty ends up finding out that his dear friend, the Doc, who is living in the Old West, is going to be killed by one of Biffs ancestors (showing us that all in the Biff Tanner gene pool are bad to the bone) so off Marty goes into the past to rescue Doc. Once again we have Doc not wanting to know what is going to happen, so Marty is stuck trying to get things done, and to complicate things, Doc falls in love.

Back to the Future Part three manages to hold on to the charm from the first two movies without being over the top. Whilst this one doesn't fit in with the other two as well, because it isn't all about Marty, but it still does a great job and you can't really watch it without having seen the first two or you'd be missing a lot of context and history.The special effects are good and they hold up well, one of my favourite parts involves a train, though I can't say more about it for fear of spoilers, and just as a little aside... I've been where they filmed part of this movie and it was awesome!

Love this movie as much as the other two, well worth watching all three in one marathon.

Score: 10.0
Product reviews for listing 3707: Seeking a Friend for the End of the World -  Directed by Lorene Scafari

Dodge is a man who has always played by the rules of life, while Penny his neighbour is an extroverted woman who hasn't. From these opposite perspectives, both ... more...