Back to the Future review 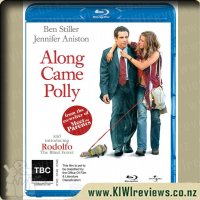 For the most cautious man on Earth, life is about to get interesting.

Reuben Feffer's best-laid plans for life and love careen wildly off track when his bride dumps him on their honeymoon for a muscle-bound scuba instructor. Stunned, humiliated and in the grip of acute indigestion, Reuben plans to play it safer than ever. But a chance encounter with an adventure-craving, childhood friend named Polly shoots him into a whirlwind of extreme sports, spicy foods, ferrets, salsa dancing and living in the moment.

This is a movie that tries to do the 'fish out of water' scenario but doesn't do it well at all.

Reuben Feffer (Ben Stiller) is a risk-assessor and his choice of wife seems to be the safest until on their honeymoon she cheats on him with a scuba instructor. Once home he bumps into Polly, an old school chum, and gets handed a job of convincing one of the worlds biggest thrill seeker to use his buisness for his accounts. Very fish out of water for Reuben, then add him going out with Polly who is the exact opposite of him and you should have a few good laughs, however I was more grossed out than anything half the time.

The problem is that their relationship, and indeed Reuben's entire array of friendships and business associations, are implausible not in a funny way but in a distracting way: We keep doubting that this person would be acting this way in this situation. What kind of a risk assessor is Reuben if he knows he has Irritable Bowel Syndrome, and nevertheless goes on a first date with Polly to dinner at a North African

Whilst everyone did a good job as actors, Phillip Seymour Hoffman with the best character, the script was awful, I mean who wants to see a man who knows he has irritable bowel syndrome eat a lot of spicy food and then sweat profusely etc.? The jokes run fast and furious but almost all fall flat on the ground, the writes seemingly thinking the same fish out of water scenario will work the entire movie length.

After a while you get tired of the movie and I'm just not keen to watch it any time soon.

In September 1971, thieves tunnelled into the vault of a bank in London's Baker Street and looted safe deposit boxes of cash and jewellery worth millions of pounds. None of it was recovered. Nobody was ever arrested. The robbery made headlines for a few days and then disappeared - the result of a UK Government 'D' Notice, gagging the press.

This film reveals what was hidden in those boxes. The story involved murder, corruption and a sex scadal with links to the Royal family - a story in which the thieves were the most innocent people involved.