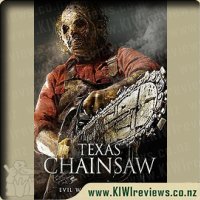 A young woman travels to Texas to collect an inheritance; little does she know that an encounter with a chainsaw-wielding killer is part of the reward. In the aftermath of Tobe Hooper's classic, the townspeople take dramatic action against the Sawyer family. They had long suspected the family were responsible for several mysterious disappearances and had their suspicions finally confirmed when a young woman escaped the house.

Word of the murders quickly spread, and a vigilante mob of enraged locals surrounded the Sawyer stronghold, burning it to the ground and killing every last member of the family - or so they thought...

I love the Texas Chainsaw movies and the original one remains a firm favourite for me. When I saw another one was coming out I was very pleased. Even better there was a 3d version of it so I could finally test out the 3d on our T.V. with a horror movie.

The movie begins with the ending of the original movie where a girl escapes and tells the town of the horror on the farm. The town jumps to action and a mob of towns people burn the home to the ground taking the family with it or so they think. The audience then finds out that a mother and baby got out, one of the guys find them and kills the mother and takes the baby to raise as his own. 18 years later as a grown woman the baby travels to Texas to inherit a house left to her by a grandmother she never knew she had. She then discovers she has inherited more than just a house, as she slowly begins discovering the horrors that await her she also begins to discover where she came from and the story of her real family.

I really enjoyed the movie and it was a good watch but not as scary as other Texas chainsaw movies. It also seemed a little out of order with the other movie as it was made to follow on from the first yet there are 4 or 5 other sequels before it. Despite this flaw I do recommend it to anyone who likes the Texas chainsaw movies.

Score: 9.3
Product reviews for listing 1858: Into the Wild
Directed by Sean Penn

Into the Wild is inspired by the true story of Christopher McCandless, a young man who abandons his life of comfort to pursue the freedom of life on the road, a quest that leads him to the Alaskan wilderness and the ultimate challenge of his life.