Revenge of the Nerds review 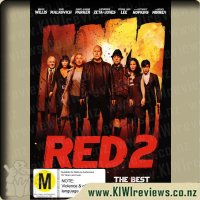 To succeed, they'll need to survive an army of relentless assassins, ruthless terrorists and power-crazed government officials, all eager to get their hands on the next-generation weapon. It's a mission that takes them to Paris, London and Moscow, where they cross paths with Frank's seductive former flame Katja (Catherine Zeta-Jones), as well as Bailey (Anthony Hopkins), a brilliant scientist from Frank's past. Outgunned and outmanned, they have only their cunning wits, their old-school skills, and each other to rely on as they try to save the world-and stay alive in the process.

I know I have seen part 1 and remember enjoying it but to be honest do not really remember it, so when my husband and I sat down to watch this we were like do you remember the first one and only could remember Bruce Willis was a spy.

I found this movie to be so refreshing. It is so neat to watch actors acting there age instead trying to be 10 years younger. They weren't over the top in the fight scenes and it was just a really good hearted movie. The casting was great and had some big names in it. Loved John Malkovich in this - have never been his biggest fan but had me in stitches numerous times.

I think because this movie did not take itself to seriously and had a lot of comic relief it was a really fun movie to watch. One thing that really got to me though was Mary-Louise Parker : her mouth - seriously why do Hollywood stars have to have face lifts when they are so terrible to look at. Her mouth looked like she was permanently the joker. I could not believe it when guys are suppose to be falling for her the only thing I could think was, what are they falling into the nearest bucket because yuck. It was so distracting in any scene she was in.

I was really impressed about Byung-hung Lee and think he will definitely be the next big thing. Helen was extremely funny to watch and the way she could smash a guys head into a table does the female race much credit. Bit of a no brainer movie Bruce Willis trying to be killed for something he was suppose to have done but didn't and ends up saving the day. Just a really fun movie.

In RED 2, Frank gets his team back together to save the world, bringing his girlfriend along for the ride.

With a missing nuclear device missing and assassins after them the team must work quickly to locate it whilst dealing with a brilliant scientist (Anthony Hopkins) from their past and an old lover of Franks' which puts Sarah in a spin as she tries to copy what she sees Frank having fallen for when it came to Katja. As with the last movie there is plenty of laughs to be had as they race against the clock to save the world from a nuclear war. The reason these movies do so well for me it that they never take themselves too seriously.

As usual they all do a great job acting, if you have loved any of the actors in any of their previous films then I am sure you will enjoy this, it strikes me rather as what Die Hard could have been had it stopped taking itself seriously. Lee Byung Hun however, to me, feels like he was there, more for eye candy (why else do they have someone strip on screen) than as a worthwhile character to add to the movie. Regardless of this the movie is still lots of fun and I will be adding this to my collection.

If you enjoyed the first RED then you will enjoy RED 2 for sure.

The final movie in the Arthur and The Invisibles trilogy.

When Arthur receives a distress call sent from the Minimoys, the invisible people who live in his back garden, he rushes to their aid, ready to fight the evil Emperor Maltazard and save Princess Selenia.

But, what he doesn't know is that the plea for help is all part of Maltazard's evil plan to trick Arthur into entering the Minimoys' ... more...