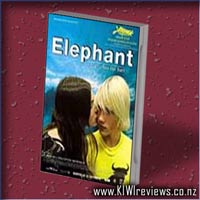 Disclosure StatementFULL DISCLOSURE: A number of units of this product have, at some time, been supplied to KIWIreviews by the company for the purposes of unbiased, independent reviews. No fee was accepted by KIWIreviews or the reviewers themselves - these are genuine, unpaid consumer reviews.
Available:
February 2005

A violent incident rocks the students and faculty at a high school in Portland, Oregon.

Anyone who has heard of the Trenchcoat mafia or Columbine Highschool will understand why this movie had to be made. Why Gas Van Sant had to make it the way he did.

The news media hypes shootings, especially 'killing spree' shootings. This makes the kids into media celebrities overnight. Maybe this is what they wanted when they decided to shoot their way through a class, a school, a playground... maybe not. But it makes them into something other than what they really are... kids needing help. The form of help will differ, but the fact doesn't change.

We, those on the outside, those that survived, those that almost died... we wonder "Why did they do it? What were their motives?" Gas addresses that question in this film, and presents a startling possibility... that those kids just don't know or care what they are doing. It's just something that they do for no reason in particular. Maybe it's the video games, maybe the internet sites they see, maybe it's just because they are truely, totally bored with their urbanite life and want to really do something that might give them a spark.

This movie gave me much thought-provoking raw material, and was presented in such a way as to leave all conclusions open to the interpretation of the viewer. As the ultimate voyeur, Gas makes us able to leap back and forth in space and time to get all the angles on each thread that weaves itself into the final gory tapestry of a disaster. This means that no matter who you are, you'll see something different in the movie. Gas doesn't steer you down one conclusive path, but rather gives you a flowing map of all the paths, and let's you decide which ones hold relevence, and which ones are just the final moments of lost innocent lives.

Overall, I was quite stunned by this. it left me with afterthoughts that have stuck around for over a week. It really can open your eyes to the world around you, making you try to climb behind the eyes of the people you see around you every day. The only let-down was the stilted and unrealistic behaviour of the kids when the shooting started.

A fanciful and chilling story set against the backdrop of a fascist regime in 1944 rural Spain. The film centers on Ofelia, a lonely and dreamy child living with her mother and adoptive father; a military officer tasked with ridding the area of rebels.

In her loneliness, Ofelia creates a world filled with fantastical creatures and secret destinies. With post-war repression at its height, Ofelia must come to terms with her world ... more...