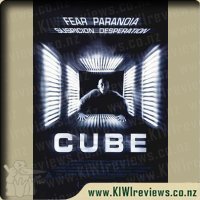 This low-budget science-fiction drama, winner of a 1997 Toronto Film Festival prize for "Best Canadian First Feature," depicts the plight of a group of people clad in prison-style uniforms and trapped in futuristic cube-like metal cells. Their memories are hazy; no one can recall how they got there.

Alderson (Julian Richings) awakens in a cell, seeks an exit, and arrives in an adjacent cube where he's sliced and diced. Former cop Quentin (Maurice Dean-Wint) becomes the group leader, and he's challenged by conspiracy theorist Dr. Holloway (Nicky Guadagni). Government worker Worth (David Hewlett) remembers a past government link to the project. A discovery that the cubes have numerical codes suggests study by math-student Leaven (Nicole deBoer) while former thief Rennes (Wayne Robson) knows some escape tricks. However, the extreme behavior of Kazan (Andrew Miller) becomes a threat to their survival.

The first time I went to see this movie, I was by myself. I'm not sure how that happened. I am not really much for thrillers or horrors and this movie is essentially both. It was showing at our local art house theatre and probably during the film festival. During my youth I went to a lot of festival film, and saw a lot of stuff I could not un-see.

Now with this film, it is fairly simple. The premise is simple, if not a little vague. The costumes, and sets are clean and simple too. But boy, does it manage to deliver terror. That first few minutes of the film, basically sets the scene for the whole thing, and I was so horrified by it that it meant I didn't exactly see a lot of the film. But I heard most of it.

While I can not say that it was my sort of film, I can still say that I was impressed with the dialogue and the ease at which I was put at unease. The effects were very believable. Really very believable. I have since seen this film several other times, as I introduced my husband to it. He really likes it and so we have watched it a couple of times since.

My husband had been wanting to see Cube again for ages, he remembered it fondly, and we finally managed to find it on DVD when a video shop was closing down and selling their stock.

We sat down to watch this for movie night with my mum and the first thing my husband says is 'just so you know it's very gory'... Well... compared to movies filmed today this wasn't gory at all. You start of with a man climbing through a small door and suddenly being sliced into lots of bits, looked more realistic than horror movie deaths these days. We then switch to a room with two people in it who end up being joined by a couple more, and they must all work together if they want to survive.

This is quite a clever movie and doesn't need anything big or fancy to draw you in. All the rooms look the same (other than colours of the rooms) but it's a puzzle to work out which room has a deadly trap and which room is safe. Paranoia rises between the characters as they try to work with each other and trust in them to get it through the Cube alive. I really like the psychological side of this. Rather enjoyed it.

This is a good sci-fi/thriller movie. Due to the limited use of special effects this doesn't feel too dated so it's worth a watch.

When Cyrus Kriticos, a very rich collector of unique things dies, he leaves it all to his nephew and his family. All including his house, his fortune, and his malicious collection of ghosts!