ProdID: 5092 - The Lords of Salem
Directed by Rob Zombie 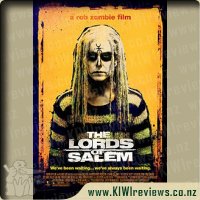 The Lords of Salem product reviews

The Lords of Salem is a 2012 Canadian-American independent horror film written, produced, and directed by Rob Zombie.
The plot focuses on a troubled female disc jockey in Salem, Massachusetts, whose life becomes tangled with a coven of ancient witches.

For Rob Zombie fans, this movie will be sure to please. This film is the first film that Rob Zombie has made with total creative control, which will be pleasing to many of his fans. The Lords of Salem is a genuinely nasty, and evil movie, that is most definitely intended for adult viewers only. If you usually allow your teenagers to watch horror movies etc, I would seriously reconsider it when it comes to this movie. There are some rather graphic, and 'would be hard to explain to young teenagers' scenes, that are best kept for adult viewers who can make want the want from what they are seeing.

The Lords of Salem is one of those movies intended to scare, shock, and offend, it is typical Rob zombie style, yet at the same time, it will possibly confuse more than it will scare. But it will most definitely offend and shock some viewers. The downside is that, even though it is a fantasy type horror movie, as it progresses, you get the feeling that a plot is in action, but no real plot ever actually materializes fully, and at times the film can become quite incoherent.

I was quite looking forward to this movie, as I have quite an interest in witches of days gone by, and the witches of Salem, but sadly this film did not deliver. However I do believe I partially expected that anyway, it is Rob Zombie after all. My husband loved it! But to be perfectly honest, half or fully naked crazy witches, fantasy, horror, sex, the concept of the Lords evil song, etc was gonna be a hit with him anyway.

At the end of the day, this film is one that some will love, some will hate, others will love to hate it and yet others will hate they love it! It is what it is...and it is...Rob Zombie!

Alex's bone chilling gift reveals itself just as he embarks on a trip to Paris with his high school French class. In the plane's cabin, buckled-in and ready for take-off, Alex experiences his first powerful premonition. He sees the plane explode in a fiery blaze moments after leaving the ground. Sensing ... more...