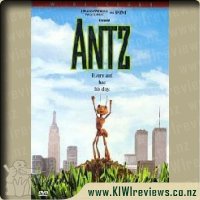 Life is no picnic for Z, a small worker ant with some very big ideas whose chances of landing the beautiful Princess Bala are literally one in a billion. But when Z convinces his soldier ant buddy Weaver to switch places with him, his simple life takes a wild turn. From his battles in the termite war to his search for "Insectopia," Z's adventures land him in a final confrontation with the ruthless General Mandible who has planned to liquidate the colony.

Once the most insignificant of workers, Z may just turn out to be the biggest hero of them all!

Antz has great animation, it is very well made and presented with a neat enough story line. But even my kids were not overly impressed with this one. Of all the movies we own this one would be our least watched, which confuses me as to why we actually have two copies of it lol one of which has never even been opened. The movie is still an enjoyable watch, just not a favourite.

Ever wondered if every ant out there is the same? Well Antz proves to us that not all ants are exactly the same.

Z doesn't like the job that he was given, being a worker ant. He falls for the princess and on an attempt to meet her gets sent into war. When he's the only one to return he is treated like a hero and thinks things are going better when he discovers a hideous plot to destroy half the colony. With some big names who bring this story to life and give the characters real life, this is a really fun movie for all ages.

The characters are really well done, full of life and very believable which is always a good thing, especially in an animated movie. The storyline is done really well, it has plenty of range from the odd ant out, war, treachery, romance, drama, action, basically all the right stuff to make a fun movie and keep the adults entertained as well. I enjoy watching this with my kids as there is plenty to keep them entertained whilst being a fun movie for me and my husband as well.

Antz is a well done, for all the family movie.

While attending the execution ceremony for the last of the Ba'al clones, 2 members of SG1 vanish into thin air, and General Jack O'Neill is killed.

Fleeing back to Earth, the remainder of SG1 find themselves in a world where the Stargate never made it back to the USA, but was instead sealed in ice in the hold of a ship, and their own history has been erased.

Now they must convince a government and military that the timeline ... more...