« The Underland Chronicles 4 - Gregor and the Marks of Secret review

ProdID: 5069 - The Underland Chronicles 5 - Gregor and the Code of Claw -  Written by: Suzanne Collins 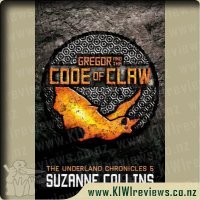 The stunning conclusion to the riveting Gregor the Overlander series. Everyone in the Underland has been taking great pains to keep The Prophecy of Time from Gregor. Gregor knows it must say something awful but he never imagined just how awful: it calls for the warrior's death.

Now, with an army of rats approaching, and his mum and sister still in Regalia, Gregor the warrior must gather up his courage to help defend Regalia and get his family home safely. The entire existence of the Underland is in Gregor's hands, and time is running out. There is a code to be cracked, a mysterious new princess, Gregor's burgeoning dark side, and a war to end all wars.

The final battle approaches, yet another prophecy hangs over the warriors head but how accurately is it being interpreted? Some parts were easy to understand but then some parts made no sense at all, a princess cracking a code of claw is mentioned but the princess the underlanders thought of was Boots who at 3 thought it was a great game.

Lizzie finally got a look at the underland and Gregor finally mastered a vital skill. There was a lot of fighting as you would expect for a final battle, who is going to win and what will happen to the losers? Some techniques divide the humans, mainly Gregor who doesn't agree with some of the techniques used and thinks that he should have more say after all he is the warrior.

I'm not impressed with the ending at all. Way too many lose ends, what happens to Gregor''s family? His mom wants to move to Virginia to be far away from New York and the entrances to the underland but part of the family wants to stay in New York and Gregor is thinking about maybe going back to live in the underland permanently as how can he have a normal life again after seeing and doing all he has done. The other thing I'm not happy with is how and who killed Ares, I thought he deserved better than that.

The conclusion to the Underland series is here, and whilst the book was great, the ending could have been better, but who knows, there may be more adventures for Gregor yet to come.

The fifth book in the Underland series starts mere hours after the conclusion of the fourth book. Gregor has found out about the last prophecy that involves him and must try and work this out whilst a war begins to rage around him. Things become more tense when he is unable to get his mother out of Regalia and then his sister, Lizzie, ends up in the Underland with no chance of going home until the war has ended.

With plenty of tense moments not only with the war going on, but between each other, and then throw in the sad parts (it is a war after all, and some parts do try and pull on the heartstrings) as well as the actual fighting and you have one very packed book but it is all pulled off very well and doesn't feel too over packed. The only thing that I didn't really like was the ending of the book, everything states that this is the final book yet the ending doesn't act like a final book, so it felt a bit flat to me and left me feeling flat about the series as a whole.

A great finale to a great series, just the ending needed a bit more closure.

There is a hint of Armageddon in the air. According to the Nice and Accurate Prophecies of Agnes Nutter, Witch (recorded, thankfully, in 1655, before she blew up her entire village and all its inhabitants, who had gathered to watch her burn), the world will end on a Saturday.

Next Saturday, in fact.

So the Armies of Good and Evil are massing, the four Bikers of the Apocalypse are revving up their mighty hogs and hitting the ... more...