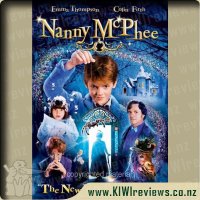 Based on the Nurse Matilda series of books by Christianna Brand, this dark and witty fable stars Emma Thompson as a person of unsettling appearance and magical powers who enters the household of the recently widowed Mr. Brown (Colin Firth) and attempts to tame his seven exceedingly ill-behaved children. The children have managed to drive away 17 previous nannies but as Nanny McPhee takes control, they begin to notice that their vile behaviour now leads swiftly and magically to rather startling consequences.

Mr. Brown has recently lost his wife and is now at his wits end as he tries to control his seven children, one night, who should come to his aid (not that he knows it yet) but Nanny McPhee.

I don't mind, either way, about Colin Firth, but really like Emma Thompson, and with many people saying that Nanny McPhee was the new Mary Poppins (is it ironic that Emma is now playing the author of Mary Poppins?) I just had to watch it, forget the kids, this was all for me. Nanny McPhee is there when you need her but don't want her, and leaves when you want her but no longer need her. There are many ways you can see similarities to Mary Poppins, but at the end of the day this is its own movie.

The kids all do a great job, and it was funny to see three actors in this movie who were in Love Actually together as well. You really do feel for Mr. Brown, trying to move on from the loss of his wife whilst trying to keep control of his children who in a way have lost both mother and father. I loved the costumes, especially in the wedding scene (though I wouldn't wear them).

Nanny McPhee is a fun movie and good for the whole family.

Buddy is a good dog, and after searching for his purpose through several eventful lives, he is sure that he has found and fulfilled his purpose. Yet watching on as curious baby Clarity gets herself into mischief and numerous dangerous situations, he is certain that this little girl is very much in need of a dog of her own. When Buddy is reborn, he realizes that he has a new lease on life and a new ... more...