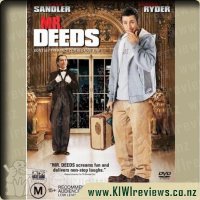 In this goofy remake of Frank Capra's 1936 Mr Deeds Goes To Town, Adam Sandler is Longfellow Deeds, a loveable small-town eccentric who inherits $40 billion and the controlling stake in a multimedia empire owned by an unknown uncle. However, the slick M.D. of his uncle's businesses (Peter Gallagher), has plans to dispose of the empire to make a quick megabuck. Meanwhile, no-nonsense female reporter Babe Bennett (Winona Ryder) falls for the charms of Deeds when she's assigned to write an expose on him.

A small town man, who is loved by all, ends up inheriting a forty billion dollar empire Of course, along with this comes a businessman who simply wants to sell the company out to make himself rich and never mind everyone else.

The characters are good and what you would expect, though I did find Babe (Winona Ryder) to be quite annoying and would have happily replaced her with anyone else.

But other than her the choices for actors was good. Keep an eye out for the usual cameos in Adam Sandler movies as they perform their small parts, fun as always. Emilio was by far the favourite character, with his love of changing peoples socks for them and his "very, very sneaky" appearances throughout the film.

The jokes are pretty standard and the only ones that still have me laughing, half a dozen viewings of the movie later, are the ones involving Emilio, simply because I find him so much fun and love his whole character. I could easily watch a movie just about his character. Everything else in this movie gives what is expected, some laughs, some romance and a little bit of action.

A decent Adam Sandler movie, better than some but not yet his best.

There's something wrong with Estherâ¦

Young married couple Kate (Farmiga) and John (Sarsgaard) are devastated at the tragic loss of their unborn child, a loss that has taken a toll on both their marriage and Kate's fragile psyche. When the couple decides to adopt another child they find themselves drawn to Esther, a young girl at the local orphanage. Almost as soon as they welcome the little girl into their home an alarming ... more...