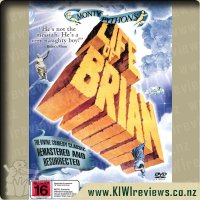 Monty Python delivers the group's sharpest and smartest satire of both religion and Hollywood's epic films. Set in 33 A.D. Judea where the exasperated Romans try to impose order, it is a time of chaos and change with no shortage of messiahs and followers willing to believe in them. As its centre is Brian Cohen, born in Bethlehem in a stable next door, who, by a series of absurd circumstances is caught up in the new religion and reluctantly mistaken for the promised messiah, providing ample opportunity for the entire ensemble (Graham Champman, John Cleese, Terry Gilliam, Eric Idle, Terry Jones and Michael Palin) to shine in multiple roles as they question everyone and everything from ex lepers, Pontius Pilate and haggling to revolutionaries, crazy prophets, religious fanaticism, Roman centurions and crucifixion, forever changing our biblical view.

"If life seems jolly rotten, there's something you've forgotten, and that's to laugh and smile and dance and sing. When you're feeling in the dumps, don't be silly chumps, just purse your lips and whistle - that's the thing."

One of the most iconic songs from Monty Python ever in this movie, heck, even my husband knew the song before we watched the movie, and to be honest, I would watch the whole movie just for that song, but since this is a review on the movie and not the song I better write a bit more.

Brian is born just a few doors down from Jesus and gets mistaken as the messiah by the three wise men, and his life doesn't get any better after that.

There are some wonderful moments, like Brian writing protests on the walls and having a Roman Centurion correct him on his spelling and grammar. Then there is the entire Biggus Dickus scene, utterly hilarious. This movie is just what you would expect from the Monty Python team and really so much fun, "He is not the Messiah, he is a very naughty boy!"

If you haven't seen The Life of Brian yet, then you need to, it is well worth a watch.

In a time of conflict, a group of unlikely heroes band together on a mission to steal the plans to the Death Star, the Empire's ultimate weapon of destruction. This key event in the Star Wars timeline brings together ordinary people who choose to do extraordinary things, and in doing so, become part of something greater than themselves.