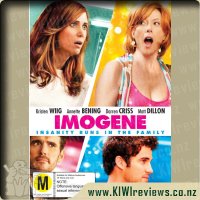 Kristen Wiig (Bridesmaids) stars as Imogene, once a promising young New York playwright whose promise has fizzled, thanks to a crisis of confidence. Heavily in denial about being dumped by her society boyfriend, Imogene uses her skill for drama to stage an elaborate fake suicide as an appeal for his sympathy. But her attempt backfires when she's put into the custody of Zelda, her estranged gambling addict mother (Annette Bening - The Kids Are All Right), and must return home with her to the Jersey Shore.

Desperate to get back to her Manhattan circle of so-called friends, Imogene must finally deal with her family, including her unique brother Ralph, Zelda's new boyfriend The Bousche (Matt Dillon - There's Something About Mary), plus a cute young lodger (Darren Criss - TV series Glee), who together help Imogene sort out her place in the world.

This was one of those movies that takes awhile to get going, in fact in the start I found my mind wondering off a few times and had to really concentrate on actually watching the movie! However the movie did grasp my full attention and stayed that way to the very end once it got going. The slow start can't have put me off to much as I'm already planning to watch it again this weekend with my hubby who didn't watch it the first time round.

Kristen Wiig does a fantastic job as Imogene who is a full on character, reaching out for support and slightly loosing the plot a little to start with. However throughout the movie she turns her entire life around, figures out who her true family/friends are and discovers love along the way. I guess the ultimate in life and also a nice story line to show others that you really can turn your life around no matter what the circumstances!

When Imogen goes to live with her mother there were definitely some weird moments - with Imogene's unique brother Ralph who has some very 'interesting' ideas. Again it made me laugh because it so real life I guess is the only way to explain it. There was also her mums new boyfriend - The Bousche who was kind of creepy and just plan right weird with no-one allowing to know his real name or where he worked. To start with I had suspicions that more of the story line was going to do with him but he turned out to mostly be a side line character really. Although he did mean a break n enter/kidnapping which added a big of excitement to the story line.

Some good laughs from lines the cast say as well as the stupid things they do lol! I wouldn't go as far as saying this movie was "full of laughs - I had a sore belly from laughing afterwards" type but none the less it was definitely still a comedy, was light and heartfelt. Due to language, sex scenes and the notions explored this movie definitely suits its M rating. A movie I would recommend to others and intend to watch again myself.

Score: 6.5
Product reviews for listing 4204: House at the End of the Street -  Directed by Mark Tonderai

A mother and daughter move to a new town and find themselves living next door to a house where a young girl murdered her parents. When the daughter befriends the surviving son, she learns the story is far from over.