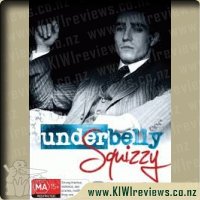 The name Squizzy Taylor will go down in history. Long before Gangitano, Moran, Trimbole and Williams hit the headlines, Squizzy was the most infamous crime tzar Australia had ever seen.

Driven by an insatiable appetite for money, power and fame, Squizzy ruled it all and played the game like no other - courting the press, entertaining the masses and baffling the police. And he would do anything to stay on top - betraying or extinguishing anyone who stood in his way.

Loved by woman, feared by men, Squizzy was a master manipulator... and his legend lives bold and strong in the pantheon of Underbelly anti-heroes.

Now watch in awe as Squizzy comes to life in this shocking, glittering and adrenalin-fuelled series that takes the world of Underbelly to a whole new area.

A great series to watch, we have been Under Belly fans for a long time now but this time round never got to watch it on T.V as it was on too late at night (we have a new born in the house meaning bedtime is pretty early

). Needless to say I was stoked to be able to review this DVD and be able to watch the series we had completely missed. The DVD comes with the options of 'play all' or 'episode by episode' which is great - we choose episode by episode and watched them when we had the time.

Based on a true story; Squizzy Taylor's life and career as a Melbourne gangster are explored fully in this DVD. Looking back in time (to the 1915's to 1920's) is always a pretty surreal thing to me and sometimes it takes a while to get into the movie, purely for this reason alone. But it isn't long before the actors have captivated you and you are right in the middle of what's happening - lies, cheating, murders and crime are not unusual in any Under Belly episode and this series is no exception to this. In fact I have to say while rated MA - 15+ which is good, I think it should probably be rated a bit higher. I can't imagine letting any 15/16year old I know watch it that's for sure.

The main character Squizzy Taylor has appeared before in the series 'Razor' but it took us a while to make that connection. It always kind of does with Underbelly series - they are often linked but not so that you need to watch them in a particular order I don't think. More that each series explores a different gangster of Australia's drug and gang scene so of course there are some bits that overlap. If there is a particular order they are meant to be watched in, we have never heard of it and certainly would watch them all again in the right order if that is the case. These episodes really are that good that you can watch them more than once. Generally speaking you tend to notice or take more in the more you watch them too.

This is the sixth in the series of Underbelly that have been produced and reportedly the last which makes me pretty sad as both my husband and I have loved watching all of them! Definitely recommend these to others. It really is quite fascinating watching what was everyday life to the gangsters of Melbourne, a far cry from our life as we know it!

Score: 9.8
Product reviews for listing 2203: The Sky at Night : Apollo 11, A Night to Remember -  Type of Show: Historical Documentary

In a pioneering speech on May 25th 1961, President John F. Kennedy pledged that America would land a man on the moon before the end of the decade.

The pledge was fulfilled when Apollo 11 manned by Neil Armstrong. Buzz Aldrin and Michael Collins successfully completed its mission in July 1969. This special Sky at Night film, introduced by Sir Patrick Moore, pays tribute to this phenomenal undertaking and celebrates what has been ... more...