SHINE: Make Them Wonder What You've Got review 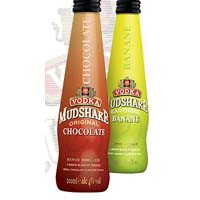 Vodka Mudshakes is a fresh innovative idea, manufactured in New Zealand and combines real flavoured milk with alcohol in an RTD.

This is currently the only product of its kind available in the market place.

I honestly don't like these. I am lactose-intolerant, so I do try to avoid anything with the word milk in it. I have had people in the past put shots of baileys or Southern cream into my beer, and watching it curdle would be enough to upset any stomach.

But I do still consume dairy products (as long as they are worth the repercussions), and I am aware that milk wont curdle in vodka, so I have invariably given them the old college try. But I'm not impressed. I will admit that it is creative, and it is becoming a much more popular flavor now, but it just didn't appeal.

I guess I have never been comfortable with having a bad aftertaste with my milk products. It tasted nice while I drank it, but once I swallowed it and the taste of the vodka kicked, it was less than pleasant. I do enjoy flavoured milk, and I enjoy vodka, but the combination is something that I will be staying away from.

Apart from the flavor, the packaging looks nice with some snazzy full bottle labels, and they come in a variety of pack sizes (as few as 4) which is convenient. But not for me.

I absolutely love chocolate milkshakes so these are pretty dangerous for me as I could easily drink a few. I first started drinking these as a teen they were so cheap and affordable that I could easily buy a few for my weekends drinking. I recently bought a couple when staying with my sister and we quite enjoyed sitting and enjoying one of these at night.

The taste is really nice it doesn't have a strong vodka taste, but it has a rich creamy chocolate taste and texture which makes it really easy to drink. The bottles are quite small so you can easily drink a few and still be feeling okay although they are about 5% alcohol from memory. They are so dirt cheap that they are easy to buy for a summer barbeque.

I almost cringe when thinking of drinking these as a teen especially at parties where you would play the drinking game where you had to pour a bit of all different types of drink in one glass and one person would have to drink the glass. This doesn't mix well with other drinks so you would end up with one disgusting drink really!

Mudshakes are a dangerous little drink. 4% per bottle, and generally 4 bottles for $10, this is my pick of the bunch as far as RTDs go. I have tried most flavours in the range. I love the Caramel, Banana and the Chocolate one. What I love is that the milky flavour masks the vodka taste more than the fizzy soda RTDs. Ths makes them deliciously dangerous because you do drink them as quickly as a milkshake.

Of all the flavours in the range though, my absolute favourite is the Pina Colada one. Its a fantastic mix of coconut and pineapple flavour. I picked up a 4 pack of these the other day. These are very much my treat drink. I get a craving for a quiet drink, and these really hit the spot. I love to chill a bottle or two down, wait for the children to be asleep and share a drink with my husband. While I was on holiday, a bottle of this chilled right down was a delicious way to cool down on a hot evening. The unit we were staying in seemed to be a bit of a heat trap, so I really appreciated a cold drink.

I had a bit of a play with the versatility of the product as well. Firstly I added this to my evening coffee. I used it in place of my usual milk portion. This added a nice sweetness and a tropical surprise to my coffee. I also had a go at freezing it. It made a really refreshing milky iceblock. I'll definitely continue to buy this yummy product.

MMMMMM Mudshakes. I adore these things and can drink them until the cows come home. My favourite one has to be the Chocolate. I have tried the Caramel but it just didn't do it for me.

I have been drinking these since they first came out and still enjoy them today, I am not a big drinker but find it very hard to stop once I have started with these. I used to love it when they came out with different flavours for summer and winter, but I have noticed they don't do that as much any more. I have tried the Banana and Strawberry and thought they were great, especially when mixed together. Its like a fruit shake, only alcoholic.

The only thing I found a problem was the fact that when they warmed up a bit they became very sickly, but that was easily solved by keeping them in ice or a chilly bin if I was out or the fridge when home.

yummo! I really love milkshakes and so to be able to enjoy this in alcoholic form is fab. One main downside is they are extremely filling....on a night out I wouldn't be able to have more than two or three as otherwise you feel as though you've eaten a three course meal! Another less important downside is they don't taste as good when not cold as cold. So if you're chatting rather than downing...they can taste a little blah after a while, although generally its a sign you need to drink a tad quicker ;)

Overall they taste fantastic and are just the perfect combo of sweetness and thickness and are very easy to drink. Are reasonably priced in the grand scheme of things as all alcohol seems rather expensive these days and I can usually pick up a pack of 4 for about $10 at a bottle store, and being that I'd only have two and move on to something else....cheap as chips :)

When I was a drinker Vodka Mudshakes were my drink of choice. It has been a few years since I have had a drink (blame it on pregnancy and breastfeeding) so I am unsure what varieties of these are still available. My favourites were the honeycomb, caramel and chocolate Vodka Mudshakes.

They definitely need to be chilled as we all know how revolting room temperature milk is. Mudshakes are even nicer served over frozen milk cubes but that involves preparation and these are RTDs.

They are very nice to drink. A bit too nice, before you realise it you have had too many. They are essentially an adult milkshake. I would drink them forgetting they had alcohol and then count how many empty bottles are siting beside me in a very short space of time. They are very sweet and creamy so probably have loads more calories and certainly more fat than most drinks. They are ideal for people like me who don't like the taste of beer or wine but like to have a drink to treat themselves.

I absolutely love Vodka mudshakes. im not a big drinker, i have 1 or 2 drinks, and can go months without a drink. but if i was let loose on the chocolate mudshake i could definitely have more than 2. i have to really force myself to limit myself!

I love Vodka Mudshakes. Choc is my absolute favourite. Price is great.
A very easy to drink beverage!! I buy these regulary.

A tasty drink, enjoyed by most people i know, and reasonably priced also. The Mudshake does contain specially treated Vodka, (so as not to curdle the milk) so it is suggested not to drink in conjunction with other vodka drinks. The Choc flavour does taste a little too much like YOGO for my liking, but as far as i know, I'm the only one who has a problem with that. The caramel is a good flavour, if a little on the over-sweet side. Cappuccino is not recommended for those who detest coffee, but as i am a coffee-holic it is probably one of my absolute favourites. The banana is maybe too artificial tasting, but who am i to complain, as i am critical of everything, so again one of the better of the range. The strawberry is THE best flavour in the Mudshake range, as i have a preference for strawberries. It is the one i would drink most readily. The honeycomb is too sickly sweet, and is OK, but not preferred by this reviewer.

I have only tried the Chocolate and Caramel flavours, as they were the only ones around when I first encountered these. The choc would have to be my favourite. -drool-

I am not a vodka fan really. If it ain't bourbon, it ain't something I wanna drink, pardner. However, when I am out at the pub or having a game of pool with friends, I like to drink RTD's, and this is an RTD that is both readily available at the places I frequent, and appeals to my tastebuds. The choc simply hides the vodka so totally I don't notice it. i get the light buzz from the alcohol, but without the bitter tang of the vodka.

I think I might seek and try the banana flavour, and see how that ranks for me though... the rest, well, not my kettle of gerbils really.

Overall, YUM for Choc, so-so for caramel (I agree, quite sickly sweet), and dunno for the rest at this stage. :) However the price-hike is shocking, as I was paying only $4.50 for mine.

To enjoy all the goodness Mai'a has to offer, all you have to do is slip your Mai'a Coffee Straw into a glass of cold milk, sip back and relax!

As the milk passes through the straw, special coffee beads dissolve to deliver a scrumptious, refreshing drink unlike anything experienced before.

Mai'a is available from leading supermarkets in the coffee aisle now!