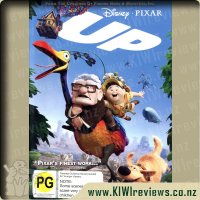 Walt Disney Pictures and Pixar Animation Studios take moviegoers up, up and away on one of the funniest adventures of all time with their latest comedy-fantasy. Up follows the uplifting tale of 78-year-old balloon salesman Carl Fredricksen, who finally fulfills his lifelong dream of a great adventure when he ties thousands of balloons to his house and flies away to the wilds of South America. But he discovers all too late that his biggest nightmare has stowed away on the trip an overly optimistic 8-year-old Wilderness Explorer named Russell. Their journey to a lost world, where they encounter some strange, exotic and surprising characters, is filled with hilarity, emotion and wildly imaginative adventure.

I was shocked at the opening scene of this movie. For a kids' movie, it hit the heart early, and it hit hard. I wasn't surprised to see a few tears in the eyes of children. This part is played at an accelerated pace, however, to provide back-story without dwelling on the main character's losses. Ultimately, the opening scene is necessary, for the viewer to understand that this is not just a cranky old man.

As an adult, I understand the feelings expressed, where you are constantly being pushed to act a certain way, and the big corporate expect you to roll over on command. I am well aware of the thirst for rebellion and adventure. Up provides all of these, wrapped up in excitement mixed with a dash of comedy every so often to break up the adventure.

I have watched it many times without children present, because it is that enjoyable a movie. Every child seems to enjoy it too, as the opening scene is forgotten and the talking dogs become the talk of the town. A great mix of fantasy and adventure, Up is a mature family film, that can appeal to both the old and young.

Meet Carl, an old man who is living in his long time home surrounded by an ongoing construction site, refusing to sell his beloved home. Russell is an eight year old boy who is a Wilderness Explorer who doesn't see much of his dad. When Carl injures a worker outside his house he is ordered into a rest home but instead attaches hundreds of balloons to his house and sets off flying, accidentally taking Russell with him.

We meet Carl as a young lad, and get to see him meet the love of his life, what then follows is such a sweet love story spanning at least ten minutes in length with no words needed and boy is it a tearjerker, those ten minutes are a far better love story than half the movies/books/TV shows out there. The character development between Carl and Russell is lots of fun and very touching at times.

I love the world they are in and what they discover. Dug, a dog who can talk (thanks to a special collar) is a real show stealer and Kevin, a rare bird, is delightfully fun. There are some real touching moments as well as some good laughs and a few action scenes, enough for everyone.

Up is a great movie and one of my favourite all time kids films, well worth a watch, several times over.

A young man named Tristan tries to win the heart of Victoria, the beautiful but cold object of his desire, by going on a quest to retrieve a fallen star. His journey takes him to a mysterious and forbidden land beyond the walls ... more...