ProdID: 4970 - Cosentino: The Magic, The Mystery, The Madness
Type of Show: Magic 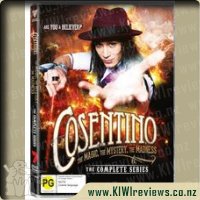 Cosentino: The Magic, The Mystery, The Madness product reviews

With world-class production values Cosentino takes the audience on a journey of incredible ingenuity, intimate magical mysteries and intense escapes - distorting all you thought was possible for a man to achieve! Featuring the breathtaking illusions The Vault, Crazy Cell, Deja Vu, Split in Two, Training and Breathless in his sold out theatre performance at the revered Regent Theatre, as well as street magic performed in-front of unsuspecting shoppers and a death defying escape that has to be seen to be believed.

Cosentino is now the face of a new generation of one of the world's oldest art forms. His grand, theatre-style show brings to life some of the most complex and riveting magic ever seen, delivering just the right amount of danger to keep the audience on the edge of their seats.

I was excited to watch this DVD and so I sat down with it last night. I have been a magician's assistant in the past and have done my own shows here and there. So I have a good understanding of what is involved in taking a concept to the stage, as well as the mechanics behind the illusions. Obviously not everything is always done the way you think as well, so even those of us with some understanding have moments of "Wow" and I certainly had that watching Cosentino.

The bigger illusions were amazing to me. I loved his stage presence too. With magicians, they often fall into two or three categories. You have the magician who's every trick makes you feel like a fool, and like he or she is laughing at you. Then you have the magician who comes across clown-ish and lacking in confidence. Then you have amazing magicians like this, who own the stage, fill the space and make you feel like you are on the journey with them and that it's all going to be safe.

One of the kid's leaving his show said it best though. "He's a madman!" describes him quite well. Confident, but not arrogant. Obviously some of the scenes would have been staged or hand picked for added shock value. Still, it all works. I found the DVD quite tame, so I decided to show my eldest daughter the first episode today.

She was enjoying it plenty until there was the blood. Then she was terrified for him and didn't want to watch anymore. I reassured her that he was going to be fine and that it would work. I promised I had seen the outcome and there was nothing to fear. Still, she couldn't get past it. Eventually she watched the illusion and everything was fine, but I decided not to show her the rest. It's up to you if you share this with kids. She watches Dr Who and all sorts of other things, but I guess real blood, and real injuries are a bit different! Ultimately a good DVD, very engaging just not for the littlies.

The name Squizzy Taylor will go down in history. Long before Gangitano, Moran, Trimbole and Williams hit the headlines, Squizzy was the most infamous crime tzar Australia had ever seen.

Driven by an insatiable appetite for money, power and fame, Squizzy ruled it all and played the game like no other - courting the press, entertaining the masses and baffling the police. And he would do anything to stay on top - betraying or ... more...