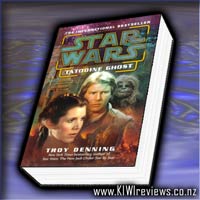 Disclosure StatementFULL DISCLOSURE: A number of units of this product have, at some time, been supplied to KIWIreviews by the company for the purposes of unbiased, independent reviews. No fee was accepted by KIWIreviews or the reviewers themselves - these are genuine, unpaid consumer reviews.
Available:
March 2004

Marriage has not changed Han and Leia much - they still bicker and banter with each other, but now they have something new to disagree on: whether to have children. Han wouldn't mind being a father, but Leia is terrified that whatever turned her own father into Darth Vader might be genetic, and she can't risk giving birth to a monster. I n an attempt to put the past to rest, the newlywed couple go to Tatooine, where they speak with the people who knew Leia's grandmother, Shmi Skywalker.

And Leia gets a gift: Shmi's diary, in which she recorded all her hopes and dreams for her beloved son, Anakin. While Han and Leia get caught up in an ever-escalating adventure on Tatooine, Leia reads her grandmother's diary and learns something of her heritage, something that will change her forever-.

Set about eight years after Star Wars: A New Hope, this new adventure in the saga carries on the high pace action and tongue-in-cheek humour between Han & Leia that has become a trade mark from the movies.

With the Empire on their tails constantly, Leia and Han Solo, newly married and disagreeing just as much as ever, travel to Tatooine on a mission for the rebellion.

Along the way they run into the past, in the form of a video diary kept by Leia's grandmother, Shmi Skywalker. From the entries Leia begins to see that her father, Anakin, wasn't always the horror she knew as Darth Vader.

I don't really wanna go too deeply into the story, but this is definitely one that had me tired-eyed and wanting to keep reading to the end of the next chapter.