Home > Categories > Entertainment > Television > Doctor Who: The Day of the Doctor review

ProdID: 4961 - Doctor Who: The Day of the Doctor
Type of Show: Science Fiction 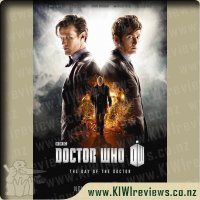 Doctor Who: The Day of the Doctor product reviews

Doctor Who: The Day of the Doctor - 50th Anniversary Special on DVD.

The action packed adventure reveals that the Doctor has a dangerous past. And he's coming back!

In 2013, something terrible is awakening in London's National Gallery; in 1562, a murderous plot is afoot in Elizabethan England; and somewhere in space an ancient battle reaches its devastating conclusion. This special also features the return of the Daleks as well as the return of the Zygons, shape-shifting aliens which up until now have only appeared in the 1975 serial Terror of the Zygons.

The extras included on the DVD are:
•  Both minisodes
•  50th trailer and an old trailer
•  Doctor Who Explained

I'm so glad that I did watch this, a good story as you get to see so much more detail about the day the Doctor felt he had no choice and has lived with the regrets from his actions for a few hundred years, if given the chance would he change his own history and would his life be different?

It was great to see three Doctors, although I had to ask who the old guy was since I have never seen the original series, just seen the one from Christopher Eccleston so there was a lot that didn't make any sense. It was cool to see how the TARDIS has changed over the years and how each Doctor makes it his own. We did get to see Rose again and I had to watch some of Clara, although she wasn't as annoying in this episode as she can normally be so I might be able to watch the new Doctor without her ruining it for me.

There was a lot of laughs (David Tennant is still my favourite Doctor) and I had to wonder if the writers of Doctor Who would ever be bold enough to have the Doctor regenerate as a woman.

This episode has made me eager to see the new series now as there have been some questions answered.

I'm a Whovian, through and through. Grew up watching the original series, still LOVE Tom Baker, and had a major excitement meltdown when the series was brought back to our screens. So naturally, the second I was able to I booked the 50th anniversary episode to record and begun counting down and getting impatient. Watching it then, and again now with it on DVD, I'm still completely loving it.

This episode gives us so much more insight into 'that day', the day of the War Doctor who ended the war between the Daleks and Time Lords by killing them all. It winds beautifully between Gallifrey, 1562 and today. We get the Daleks (what anniversary special would be complete without them) and the Zygons who still looks as hideous as they did from day one, almost forty years ago. We bring back some old faces as well as some new.

I love all the little nods and things snuck into this episode, such as the two doctors comparing both sonic screwdrivers and Tardis makeovers. The Tom Baker scarf worn by one of the characters and of course Tom Baker himself. There were a couple of scenes that had the geek in me squealing, when all THIRTEEN doctors come to the event to try and save Gallifrey and again when we have all twelve doctors standing next to each other.

This is a wonderful episode for answering some questions as well as plenty of moments for the Whovians and some great laughs. The special features give you two mini episodes, one which sees the moment the Daleks break through the defences and one which shows the regeneration of the 8th doctor into the War doctor. The documentary is great for some extra info.

This was a brilliant episode, I've already watched it four times and I'm no where near close to having had enough of it yet. If you like Doctor Who then this is a MUST!

Auckland War Memorial Museum tells the story of New Zealand, from our unique flora and fauna and our history at war, to our priceless collection of Maori and Pacific treasures.