« There Was an Old Lady Who Swallowed a Meerkat review 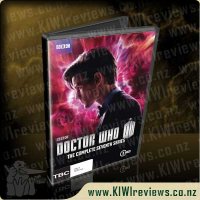 Matt Smith returns for his third series and final series as the Eleventh Doctor. Thirteen big, blockbuster-movie episodes, plus a Christmas Special - each a brand new epic adventure featuring new monsters and some familiar foes as you've never seen them before. Christmas brings The Doctor a new friend but how, where and when will he meet her?

The first half of the series chronicles the last days of the Ponds with Amy and Rory returning for their final, roller coaster voyage with the Doctor. They investigate an unexpected invasion of Earth, save a spaceship full of dinosaurs, don Stetsons in the wild, Wild West and are kidnapped by the Doctor's oldest foes and sent to the Dalek Asylum. But when they arrive in Manhattan, the Weeping Angels are waiting for them and a race against time begins as Amy and Rory's lives hang in the balance. With an empty TARDIS, the Doctor retreats to the clouds over Victorian London, until a young Governess befriends him and draws him back into a life of adventure. But the Doctor realises too late that he's already met - and lost - a girl just like her in the Dalek Asylum.

The second half of the series commences as the Doctor seeks out the twice lost, Impossible Girl called Clara Oswald. Together they find themselves evading creatures in the WiFi, battling monsters on distant alien planets, trapped in a Russian submarine with a deadly passenger, chasing terrifying ghosts, delving into the heart of the TARDIS, facing the Crimson Horror in Victorian Yorkshire, and coming face to face with an army of upgraded Cybermen. The mystery of the Impossible Girl and the Doctor's oldest secret both threaten to be revealed as the world's longest running science fiction series builds toward its explosive 50th anniversary.

Disc 1 SPECIAL FEATURES:
•  The Doctor, The Widow and the Wardrobe: Prequel
•  Asylum of the Daleks: A Prequel
•  Behind The Scenes: Life Cycle of a Dalek / Raptors, Robots and a Bumpy Ride Disc

Disc 4 SPECIAL FEATURES:
•  Cold War Commentary
•  Hide Commentary
•  Behind the Scenes: Cold War / Hide / Journey to the Centre of the TARDIS
•  The Science of Doctor Who

Disc 5 SPECIAL FEATURES:
•  The Crimson Horror Commentary
•  Clarence and the Whispermen
•  The Companions
•  INFORARIUM
•  Clara and the TARDIS
•  Rain Gods
•  She Said, He Said
•  Behind the Scenes: Creating Clara / The Crimson Horror / Nightmare In Silver / The Name of the Doctor

2013 marks the 50th Anniversary of Doctor Who - The last series to feature Matt Smith as the Doctor before the role is taken over by Peter Capaldi (The Thick of It).

My wife got me into the Doctor Who series and I've enjoyed it all so much that when we got tickets to the season 8 premier it was a big "yes please" moment.

Season seven starts off with a big Daleks episode, I always enjoy the moment when the Doctor pokes his head out of the TARDIS and says "I'm the Doctor" to which thousands upon thousands of Daleks cry "Doctor Who???" The Gunslinger is a really fun one, neat to see Ben Bowder from Farscape in the episode and I always have a laugh at "No, his name is Susan and he wants you to respect his life's choices".

The Impossible Girl was a great mystery during the season, without giving away too many spoilers we meet Clara in the first episode, then again later on and then she becomes his companion, but how is it all possible?!? When it came out my wife, mother-in-law and myself were all scratching our heads and coming up with our own theories as to who exactly she was and what the big secret was going to be. I liked the Great Intelligence and there were some fun scenes.

I really enjoyed this season and it has me geared up and waiting to where season eight continues to take us.

I am starting to realise why I have never bothered to watch Doctor Who before as it is really not my style and not usually something I do enjoy, I am enjoying the Doctor but not as much as I could. We meet Clara and I find that I really don't like her, I find that she reminds me of a child but I can't explain why, it might be due to her looks as she looks really young or it might be due to me really liking Amy and the previous companions.

The story line is not as exciting as it was in the beginning (no I didn't watch the original episodes) as they keep going over the same enemies and having the same battles. The cyber men got an upgrade and it was still nothing that I would honestly watch again.

I know that the next season has a new Doctor and I'm glad about that, I just didn't take to Matt Smith as well as I could have and I really dislike Clara so that is not helping me enjoy the series. I know that she continues into the new season but hope that the story improves and allows me to find a way to enjoy the Doctor again.

One thing I have to say is that the special effects are great, the costumes are realistic and the characters are easy to identify, I just hope that the story finds some new life and stops being so repetitive.

I am most definitely a Doctor Who fan, I may not have been here for the full 50 years this show has been running but, thanks to my dad, I have seen every single episode to date. I fell in love with the original series and when the new series came out back in 2005 I was most excited. Since then Dr Who has only been getting better and this season is nothing short of wonderful.

My son adores Dinosaurs on a Spaceship and wants to watch it again and again. I loved the first episode in this season, Asylum on the Daleks and found it to be a great intro back into the series this season. Keep an eye out for familiar faces such as Rory's dad (Harry Potter, Father Brown), Warrick Davies (Willow, Harry Potter) and Ben Browder (Farscape).

We have some new and old foes brought back into the show and watching some of the special features it was great to know that the enemy in 'Cold War' was almost unchanged from the original series. It's great to learn from the special features that some of the old tried and true methods still work, so in some cases, you might think it is special effects via a computer... it isn't. This season has also given me one of my favourite lines from the Doctor Who series, when the Doctor gets to gallop off on a horse and told it's name is Joshua his response is thus "I speak horse. His name is Susan, and he wants you to respect his life choices."

As far as story lines go, these are wonderful, there wasn't anything I didn't like. The Angels Take Manhattan is an awesome Weeping Angels episode and had me shedding a tear or two when it was time to farewell Amy and Rory. I LOVE River and any story that she is, I hope they find some way to bring her back, they could, wibbley-wobbley-timey-wimey-stuff ya' know... And then there is the mystery that is Clara. We meet her once and think nothing of her, only to have her come back in a new episode, which should be impossible...right...? I loved the puzzle that was the impossible girl and wow! what a lead up to the 50th anniversary episode.

There were only two things that I would change about this set. The first thing, I'm not sure if it's like this on every copy, but it asks you if you want to activate audio navigation, and if you do you are stuck having to listen to every option in the menu read out before you can do anything, impatience meant that when I did this accidentally I had to eject the disc to get out of it. My only other gripe is that I wish the mini prequels were on the disc in such a way that they played directly before the episode played as we ended up seeing some out of order.

I really enjoyed this set, not only because I love Doctor Who, but the special features are wonderful, none are too long and they give a really good picture of things,plus it was great to know they really did blow up a Dalek! :D

12 year old Gretchen comes to stay on her uncle's farm for the holidays, but shortly after her arrival strange things start to happen. Gretchen has a passion for science and a talent for all things mechanical, which is why the old brass weathervane "The Brass Daisy" fascinates her. But the brass daisy has a complex and terrifying significance, and Gretchen and her new friend Ronni discover its links with the far distant Sirius, the Dog ... more...