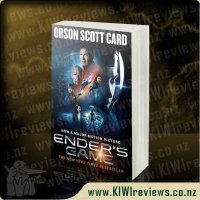 In order to develop a secure defense against a hostile alien race's next attack, government agencies breed child geniuses and train them as soldiers. A brilliant young boy, Andrew "Ender" Wiggin lives with his kind but distant parents, his sadistic brother Peter, and the person he loves more than anyone else, his sister Valentine. Peter and Valentine were candidates for the soldier-training program but didn't make the cut - young Ender is the Wiggin drafted to the orbiting Battle School for rigorous military training.

Ender's skills make him a leader in school and respected in the Battle Room, where children play at mock battles in zero gravity. Yet growing up in an artificial community of young soldiers Ender suffers greatly from isolation, rivalry from his peers, pressure from the adult teachers, and an unsettling fear of the alien invaders. His psychological battles include loneliness, fear that he is becoming like the cruel brother he remembers, and fanning the flames of devotion to his beloved sister.

Is Ender the general Earth needs? But Ender is not the only result of the genetic experiments. The war with the Buggers has been raging for a hundred years, and the quest for the perfect general has been under way for almost as long. Ender's two older siblings are every bit as unusual as he is, but in very different ways. Between the three of them lie the abilities to remake a world. If, that is, the world survives.

The Complete Cartoons of The New Yorker
Rating: 9.5

I first read the original of this (too) many years ago, but so compelling was it that reading this version brought back so many memories... and I could easily see where sections had been changed, or even flat-out removed from the original. Still, it was great to see that even with this severe editing, the feel of the original still shone through clearly.

I was surprised to see how little Ender's sibling featured in this version: Older sister Valentine - compassionate, empathic, protective... far too much so for her to be the general needed for this war, and older brother Peter - strategic and able to see the long-term goals, but also vicious, devious and sadistic, which takes him out of the running too. Peter's failure to be selected caused him to turn his frustration and anger onto his little brother... Ender... a "third". In a world where there are very strict population controls and a second child is more than most families can hope for, a "third child" is usually a sign of a family that flaunts the laws, but in this case the powers that be see too much potential in the genes of his parents. They demand a third from the couple... and Ender is the one who suffers the most.

Overall, despite all the pruning and tweaking, making this more into a bridge piece between the stunning original and the terminal failure that was the movie, I found that this was still a very enjoyable read, and I have gladly passed it on to my son to see if this slightly more modernised version captures him the way the original did when I was young.

Set in the future, Ender's game is an expansion of the original novelette written by Orson Scott Card. When I got this to read I didn't know it wasn't the original version and got it based on the high praise from both my mother and my brother (who is boycotting the author & movie now) but that's another story. What I was hoping for, I didn't get from this book.

Ender is a six year old boy who is only alive because his brother was a genius but too brutal and his sister a genius but too soft, and so laws were broken to allow Ender to be born. He begins training to eventually be a commander, far surpassing what his fellow students expect of him and rising through the levels very quickly. There isn't much information given about the Buggers except that they are bug type creatures who attacked Earth many years ago and now must be attacked whilst Earth is prepared for it.

Ender was an interesting character and I really liked getting to know him. The pressure that he is feeling to meet expectations whilst being isolated from his peers, bullied and trying not to loose himself or become what he hates most, his brother... really interesting. However, I really didn't like any of the parts involving his brother and sister, too me they just didn't fit with the rest of the book and I just didn't 'get' it, so would have happily done without it.

For a book I was looking forward to, I didn't really enjoy it. I liked the ideas (children being used to fight wars), Ender's character and the twist that I wasn't quite expecting near the end (where the original ends) but it isn't a book I would read again, though I am looking to borrow the original story from the library, so that says something, I guess.

Following on from the great success of the first book, here is another wonderful collection of word puzzles to keep you entertained for hours!

For many, puzzle-solving is a wonderful solitary pleasure, while others like to ... more...