« Home on the Range review 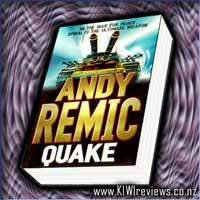 Disclosure StatementFULL DISCLOSURE: A number of units of this product have, at some time, been supplied to KIWIreviews by the company for the purposes of unbiased, independent reviews. No fee was accepted by KIWIreviews or the reviewers themselves - these are genuine, unpaid consumer reviews.
Available:
November 2004

In a future where sinister organisations plot mass destruction...
In a world where power is no longer held by nations...
Chaos is rising.

The secret organisation known as SPIRAL exists to fight a shadow war against fanatics and rogue states of every creed and politcal persuasion. Remorseless, unstoppable, of every country and of none, SPIRAL conducts it's covert operations throughout the world in a never-ending battle for humanity's survival.

But now Carter, SPIRAL's toughest operative, is facing a new and terrifying challenge. The world is being held to ransom by the creators of a new and devastating machine. One that is capable of wreaking seismic havoc, causing earthquakes and eruptions on a global scale.

It must be destroyed - and Carter must do it alone.

Though I have never been one for 'war' themed stories, I must admit to being quite taken by this one. It wasn't so much that it had tanks and guns and lots of action, it was more the 'Wierd Science' that intrigued me. In particular, the ECube strikes me as the ultimate James Bond toy. Multi-frequency scanner, intertial guidance tracker, communications terminal, remote controller for a number of devices, it's the high-tech Swiss Army Knife of the digital warfare age. Way cool! :)

The plot and action in this books is somewhat like a Japanese meal... small portions, but oh so many courses. The plot has a lot of action happening in many places at the same time, making for a difficult time of telling all the story... but Andy Remic does a great job, utilising some very colourful characters to help isolate each encounter with the dreaded Nex.

Nex... what are the Nex? They are humans who have been injected with all sorts of freaky stuff, and reshaped on the genetic level by an ancient machine, the Avelach. Older than any living civilisation, it is technology from a previous sentient species, who lived before humanity rose onto it's back legs and walked upright. It has the power to blend dissimilar genetic structures into a new, hybrid form. Thus, the Nex are humans who have been blended with insects, usually cockroaches. The superNex, the ScorpNex, are blended with roaches and Scorpions. Now there's a charming image for you to take to bed with you.

My only main gripe... an over-abundance of catchphrase codenames, acronyms, and scientific terms that just don't have anything behind them, becoming flies in the story ointment that just won't get explained. LVA... what *IS* LVA, and what sort of vehicle is a Harrier SK15? I think I spent almost as much time on Google hunting down the specs of the vehicles (those that actually exist) as I did reading the story itself.

Overall, I found this book to be quite a thriller, with added spice, such as the change of character in Carter as his Inner demon, Kade, came to the fore to wreak vengence and death upon his enemies, and the little touch of egocentricity of the author's, placing himself in the story as a tank driver. I think I will have to track down book 1, Spiral and get some of the background sorted in my head, because despite the book having a stand-alone feel, it refers back to incidents from the first book. The hints of fill-in info are a teaser, nothing more. Without the full previous story, there are holes in the flow of this book. Read Book 1 first!

Mark reads at high speed. He pauses at a comma, star jumps at an asterisk and leaps at an exclamation mark. He reads and reads until he reaches, a full stop.