She'll Be Coming Round the Mountain review 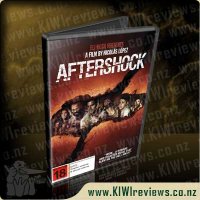 Disclosure StatementFULL DISCLOSURE: A number of units of this product have, at some time, been supplied to KIWIreviews by the company for the purposes of unbiased, independent reviews. No fee was accepted by KIWIreviews or the reviewers themselves - these are genuine, unpaid consumer reviews.
Available:
October 2012

In Chile, a group of travelers who are in an underground nightclub when a massive earthquake hits quickly learn that reaching the surface is just the beginning of their nightmare.

The disaster leads to the collapse of societal norms, including murder, rape, looting, destruction of property, and other anarchic activities. There is also the looming threat of a tsunami after the earthquake.

In retrospect I probably should of looked at the cover of the DVD case before putting this on as I was very ill prepared for what was about to happen. I assumed from the beginning it was going to be about the typical stereo type American having a drunken holiday in Chile and hooking up with plenty of drunk girls. I had read that an earthquake was going to happen and I just expected everyone to live happily ever after with a couple of marriages to follow, instead I got blood and gore and some scenes I really did not need to see. After finishing the movie I saw it was an R18 rating and I can understand why. Going from the high quality of the movie I did not expect the horror I saw. I have come accustomed to movies that give me a 'happily ever after ending', thanks mainly to watching kids movies due to my girls.

Although not all of the special effects were fantastic, it still held its own and I found this movie was completely gripping and watchable. There were several occasions where I did have trouble though trying to watch the action and read the subtitles at the same time as they could come up rather quickly, but in reality you could guess what was being said by the facials. The acting was passable and the characters, (especially the girls) were to be expected in this sort of movie.

A few of the deaths were totally random and done in unexpected ways. I found the movie to be really well done and in a way refreshing. It is actually really nice for me to watch a movie were I had absolutely no idea what would happen next. Even better an actual horror story that kept surprising me. In saying that I did guess the ending, well I actually thought wouldn't it be funny if this happens and when it did I was still left rather shocked, I am not afraid to admit that wave freaked me out big time.

If you do not like horrors I would stay away from this movie. Actually if you do not like a dose of reality with Mother Nature being shown at her worst and prisoners on the run who are really not nice people doing bad things to good people this is definitely not the movie for you.

If you have come here, in search of a movie that provides you with a happy ending after all the horror involved in a movie like this, then please, run. Run far far away, because you're not likely to find it here.

Aftershock takes place in Chile where six friends have been having a good time, they are out partying when all of a sudden a major earthquake hits, since this is based roughly on the 2010 earthquake Goggle tells us that it is an 8.8 earthquake (though we are never told this in the movie). It starts of feeling like a low budget movie, with two dimensional characters on your typical 'lets just party' holiday.

The characters never really change, there are a couple of moments showing the relationship between some of them where it actually feels real, the rest of the time it feels rather forced. There is plenty of gore in this movie but given that it is showing how people can change during an event like this I really felt like it could have done with less, in fact there was so much that there were several times when I felt close to throwing up and had to look away.

I like this movie for the psychological side of things, the 'what do/would people do in a horrid situation like that'. Given that we were told prisoners had escaped that made it easy to predict some of the moments in the movie, what wasn't fully easy was to predict the deaths, but Eli Roth involved movies seem to enjoy having people die in ways you wouldn't expect.

For the survival part I found this to be a good film but the rest just wasn't appealing and really brought the film down. However, I do think that I would watch it again, just on an empty stomach next time.

Score: 4.9
Product reviews for listing 2775: The Legend Of The Guardians: The Owls Of Ga'hoole -  Director: Zack Snyder

Acclaimed filmmaker, Zack Snyder, makes his animation debut with the fantasy, family adventure, The Legend Of The Guardian: The Owls Of Ga'hoole, based on the beloved Guardians of Ga'Hoole books by Kathryn Lanskay.

The film follows Soren, a young owl enthralled by his father's epic tales of the Guardians of Ga'Hoole, a mythical band of winged warriors who had fought a great battle to save all of the owl kind from the Pure Evil Ones. ... more...