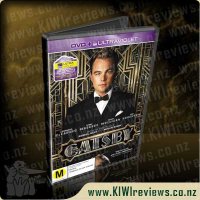 Nick Carraway heads to New York City in the spring of 1922, an era of loosening morals, glittering jazz, bootleg kings, and sky-rocketing stocks. Chasing his own American Dream, Nick lands next door to a mysterious, party-giving millionaire, Jay Gatsby. Nick is drawn into the captivating world of the super rich, their illusions, loves and deceits.

I adore the song 'Young and Beautiful' and when I found out it was on the Great Gatsby I just knew I had to see this movie. I then found out Leonardo DiCaprio was in it I was sold. I think Leo is an amazing actor and he has been robbed on the fact has not received an Oscar yet.

Within the first ten minutes I realised it was a Baz Luhrmann movie by the way the scenes were shot, it reminded me of Moulin Rouge. I also figured it was a love story which would not have a happy ending, going from his past movies. I did not know anything about this movie and had assumed it was all going to be in Gatsby head or Daisy would die and he would try and bring her back to life or something, going off the previews I had seen for this movie.

I was off by a long shot and instead its an epic love story spanning over five years where Gatsby wants to feel that first night again when he fell in love and wants to remember how he felt like god and he was powerful. If he can get her to erase the past years with Tom he will feel complete. Throwing celebrate parties hoping that one day she would walk in, so their love story could continue once more.

I loved the scene where he 'just happens' to run into Daisy at Nicks place, you could feel how awkward he was and the scene was a train crash, you could feel the love between the two of them and I thought the acting was fantastic. Although, I hate Toby Maguire with a passion, hate his face, hate his voice just really don't like him, I try not to watch movies with him in it so was very torn with this movie. He played such a pivotal part and I had to put my feelings aside to really enjoy the movie.

I found it slow in places and confusing to begin with, but did enjoy it. Loved the sound track and the songs fit the movie perfectly. Like I said Leo is a very talented amazing actor, with his boyish good looks but I did feel he was looking a little older, but he will always have a place in my heart.

Hubby and I sat down to watch this having tried unsuccessfully for two weeks to get the kids to sleep early enough for us to have a decent DVD night. Hubby has read the book which he remembers well whereas even if I have it has been long enough ago that I couldn't clearly remember the plot so I was quite happy to just sit back and watch the movie unfold in its entirety. I have been wanting to see this movie for a while so was looking forward to it being good.

I actually wished I had seen this at the movies as it is a "big" film. Amazing visual effects and this film just seeps 1920's glamour which doesn't come across quite so flash in my lounge room! The music is amazing and I absolutely loved the soundtrack. In fact enough that I would be happy with the CD (I assume there is one) for Christmas. The music is just perfect in fact almost makes the movie. Aside from the visual and musical showcase that this movie provides there is also some brilliant acting.

I have to admit a slight bias for any movie with Leonardo Di Caprio but in this movie I think I can be justified in saying he gives a brilliant performance. He is absolutely, perfectly cast in his role as Jay Gatsby and Toby Maguire a great choice also for Nick Carraway. This movie just held my attention to the end, which was a little different to how my husband remembers the book which was good! I loved the storyline and the way the story was told through Nick Carraway worked really well I thought to keep the viewer engrossed in what would happen next. Whilst this is rated M the violence wasn't more than was necessary for the story to make sense and there was no graphic sex so this is something that you would be comfortable watching with your parents or vice versa as long as everyone is over 16!

A fantastic extravaganza and if you can watch this on a big screen with surround sound even better! I give this a 10/10 and it would make a great gift for Christmas!