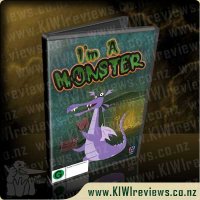 Meet a talkative Troll, a shy Yeti, a gentleman Vampire and a misunderstood Bogeyman, as they and a host of other monsters introduce themselves on camera!

I'm a Monster brings us animated interviews with the world's most famous monsters. Each monster gets their chance to talk to camera and introduce us to their world. They will tell us all sorts of fun facts about themselves - where they came from, how they became famous and how they feel about their fame.

We will avoid inventing monsters, and as all our characters will be taken from mythology or literature there will be learning and facts associated with each episode. Some monsters think being scary is fun, but others feel misunderstood.

From Bigfoot to the Werewolf and Headless Horseman to Mummy, who better to talk about monsters than the monsters themselves?

When I'm a Monster came up for review I didn't know what to expect but wanted to extend my children's range of DVDs so put my name forward. As soon as I looked at the case and saw it was 52 episodes in 104 I thought it wouldn't hold my 3.5 and 5 year old's attention. Usually short clips break their focus and they give up after a few episodes. I couldn't be more wrong. Miss 5 loves it and requests it every time it is DVD time. Her sister sits glued to the screen too. The great thing about it being broken up like this is that we can put it on for a few minutes or an hour depending what is needed.

Each episode is about a different mythical creature. Most I had heard of but several were unknown to me. They come from all around the world some from more modern times like Moby Dick and others from ancient Greek mythology. I found each episode to be very educational learning some more of their origin and believes about them. The one creature that seems out of place is the giant squid as it is real.

The animation is very basic and the adults have questions which creature it is supposed to be but the kids don't seem to mind. The way the creatures each tell their story is done in such a way that the children are fascinated rather than scared. It doesn't kill the world of fiction for the children either as they left wondering if the creature was real or not.

I see that there is also a DVD out called I'm a Dinosaur. If this is a similar format to I'm a Monster I would be keen to get it. It would be a great way for the children (and adults too) to learn more about the different types of Dinosaurs.

This DVD is a huge hit with my husband who loves history. It is safe to say we all enjoy it and are very pleased to have it in our DVD collection.