The Infinity Ring - 4 - Curse of the Ancients review 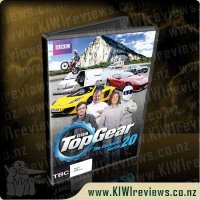 The 20th series of the world's most popular car show sees Jeremy Clarkson, Richard Hammond and James May in typically explosive form. In the course of six packed programmes, they set out to race a car against an America's Cup yacht up the coast of New Zealand, launch a highly scientific process to find the world's fastest taxi, and do their bit for European economic turmoil by blasting across Spain in three 'affordable' supercars.

Also in this series, Top Gear tackles the growing problem of flooding by designing a car that can turn into a hovercraft, investigates the popularity of 'soft-roader' cars by making the presenters into caravan enthusiasts, and tests the Jaguar F-type, the Range Rover Sport and the new double decker Bus For London as part of an epic celebration of the many brilliant machines currently made in Britain.

There are also track tests of the BAC Mono, Ford Fiesta ST, Peugeot 208 GTI, Renault Sport Clio 200 and Mercedes SLS Black, and the show welcomes a brand new Reasonably Priced Car in which celebrity guests will perform their fast laps.

The Following:  The Third and Final Season
Rating: 7.8

Well Season 20! My goodness that's a lot of years of watching one of the worlds (well probably The World's) best programmes about cars. Top Gear (The Complete Series) 20 Seasons on is quite a different programme to some of the first that aired and that is a huge credit to its success. Quite frankly the budget for this programme must be enormous but what you get is an absolute must view if you are even remotely interested in cars.

What I most love about Top Gear is that generally unless Jeremy Clarkson is saying something (and lets be honest here he does) unnecessarily offensive (such as "your face looks like a prostitutes front door" ) you can watch this with anyone. After the prostitute comment I decided I better watch the rest of the episodes without the kids...! This is a great programme that girls can happily curl up and watch for the entertainment value while the boys digest all the info (and vice versa..). Top Gear DVD's and books are also absolutely brilliant for Christmas gifts for all those males in your life that you just aren't sure what to buy for as pretty much everyone is going to enjoy a good Top Gear DVD.

I haven't watched any of this Season 20 on television (due to a faulty satellite dish that we have finally just fixed) so it was great to be able to watch episodes of Top Gear whenever I had a chance. I watched this on the computer and loved that not only can you choose what episode to watch but it also breaks down each segment of the show so if you are particularly interested in just watching all the interviews or all the car comparisons etc or just all the crazy fun drives you can do that. Also if you stop watching partway through an episode it is easy to pick back up watching where you left off.

Season 20 is full of all the usual antics. Crazy races between Jeremy in a car and James on an Oracle catamaran from the Coromandel Peninsula to Cape Reinga are always going to be a wildcard. I didn't actually enjoy that that much which surprised me as I was really looking forward to it but I loved James taking the very new and very expensive new Double Decker London Bus for a drive. What did strike me in watching this season is that a lot of the show seems scripted and there didn't seem to be the same off the cuff humour and crazy incidents that I remembered from previous early series? Might be my very poor memory but I did get a bit annoyed at bits that were obviously edited in and scripted to be funny but were a bit less so because they were forced if that makes sense.

What I did see as a huge improvement on earlier series is that when they do the comparison laps with all the fancy new technological stuff they can do now they show the three cars racing at exactly the same time on the screen one above the other for instant comparison on how they corner etc. Love that! This Season definitely was a lot more snazzy in its presentation which I really liked. Overall I did really enjoy this season and if I was considering buying any of the cars discussed on this season I wouldn't even go to a dealer without watching the whole seasons comparisons. Ultimately this is not just an entertainment show and it gives some very solid information and opinion on different models/makes of car and how they stand up to different conditions.

I would definitely recommend this for the Christmas stocking!!

Aliens are intent on devouring all the magic on earth and only one 16-year old boy stands in their way.

Tom Clarke is a seemingly ordinary boy who loves football. He lives with his dad and grandmother in an ordinary house in an ordinary street - but there's something different about Tom. He has an astonishing secret - he's a wizard!

When the alien Nekross arrives on Earth hungry for magic, there's big, big trouble in store for all wizard kind.