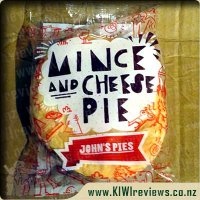 We were recently selected to help review the John's pie range. We had this pie the other night for dinner. I split it in half between me and my husband. Now, a good pie to me is a good amount of meat to gravy ratio, visible cheese and a good firm pastry shell.

For me, this John's pie ticked all those boxes and more. The mince was a quality I would expect in a meat pie. It tasted absolutely fine. The cheese sauce was ingenious. I could see the cheese, and taste it. You can not get more brilliant than that. The pastry was flaky and really good tasting. That said, my husband was less than impressed and said that he wouldn't purchase the pie again. He said it was a pretty average pie.

The price on this pie is fantastic. $2 for a pie, is pretty much unheard of these days. I feel so old when I go to the diary and think "Gosh, I remember when pies were $1". Ah the good old days, where have they gone? Anyway, the point is you get real value for money with this pie range. The mince and cheese was good and I would totally buy it again, even if my husband wouldn't.

Yes, it's a "budget" pie and so you have to expect that it's going to be chewy, with the lowest grade fillings possible... unless it's a John's Pie. For $2 per pie, I honestly can't see how they are making much in the way of profit, and no company survives without making a profit.

Having tried some of the other "budget" pies out there, and vowing NEVER to sully my mouth with them again, this was one of the pies I was hesitant to try... but you know what? Kinda glad I pushed myself to give this one a go, because it has restored my faith in the ability of budget pies to actually taste like actual food, instead of petfood wrapped in cardboard.

I had half this pie on it's own, and the other half drowning in tomato sauce, and it was pretty good both ways.

I'm pretty sure everyone loves a good mince and cheese pie, and for the price I don't think you can go wrong with a Johns mince and cheese pie. I prefer to heat mine via the oven, so this was no exception, getting warmed through thoroughly. I'm not sure if it is a standard thing for these pies or it was just the one I got, but the top is really large compared to the bottom and it sloped down on a funny angle, making the pie look quite a lot bigger on the top which I thought gave it a strange shape.

Luckily the filling was rather quite good, the mince was minced well, there was no random tough bits and it tasted good. The pastry was great as it should be, and there was a decent amount of liquid cheese which when combined together worked as it should. For the price it was good, but would I say the pie is something special? Not really, it is a mince and cheese pie at a good price and executed very well. It tastes as it should and is good value for money.

Having won several of John's mince and cheese pies in a recent competition I had enough to give everyone in the house a try. It was a huge hit with my girls (3.5 and 5 years) I even introduced them to the idea of dipping the lid into the filling and then eating the remainder with a spoon. They both polished off their pie rather than eat the hot chips I served up with them.

The filling was nice mince (no gristle) and a mild gravy. What impressed my husband the most was that there were no vegetables. Once he discovered this all the mince and cheese pies disappeared very quickly. I found the pie to be nice but I alsofound the same issue as I did with their steak and cheese, the cheese wasn't evenly distributed so much of the pie tasted just like a mince pie.

Since these pies are so affordable and a huge hit with my family I will be keeping some in the freezer for these lazy heat and eat dinner nights.

Mince and Cheese Pie, always been a firm favourite of mine and so I was keen to give this a good taste test.

Heating it up I went on a mad hunt to find my tomato sauce, in true Kiwi style I love to lather my pies in it, and Mince and Cheese pies are never an exception, I always have to have sauce on it, even if it means buying those tiny little packets. Well, I couldn't find my sauce anywhere so resigned myself to a pie without sauce.

While I was expecting not to like it as much without sauce, I really liked it and had no problem gobbling it down. I loved that the cheese was mixed really well through so I wasn't left eating just mince and no cheese. The texture was great, lovely and soft and I note that they used a cheese sauce and not just cheese, making for a better average of cheese per bite.

I really liked this pie and can easily see stocking up on a few in my freezer.

The flavour was nice, the mince had a good texture and went very well with the cheese, which was easily detectable and was also nice and gooey. The pastry was good, it was sturdy, wasn't flakey, and tasted good. A little thing I've done with pies when eating them with a knife and fork is that I try to leave most of the crust for last, because I like eating it on it's own.

With the pastry on this pie, doing that method meant that I got a good taste of the pastry itself, and my overall opinion on that was that it was very good and had a bit of a sweet taste in it! I was glad that I had a second Mince And Cheese in my pile of pies to review, because this is a flavour I have loved since my early childhood, and thankfully, this pie was as delicious as I remember them! To sum up my overall opinion on the pie's taste: it was absolutely delicious!

The fillings were good, they had a nice texture, although it is liquid enough so that it would be a hassle to eat while on the road. The pastry was also delicious, it was a bit soft though, so that is a second reason for why I recommend eating this when your not driving on in a moving vehicle. Overall, I would say that this pie is very good, and one of my favourites!

Score: 8.1
Product reviews for listing 8382: Down to Earth Organic Soup - Tomato with Cashewnut Cream -  Brand / Manufacturer: Down to Earth

Imagine tomatoes getting juicier as they soak in the sun while cashew nuts get rich with the salty breeze near the beaches of India. We've put the two together to give the ever-popular tomato soup a whole new taste and flavour.

Prepared from fresh, hand-picked organic tomato this soup is light and has high nutritional value. It is an irresistible soup with a spicy warmth and nutty sweetness look no further, this colourful delight ... more...