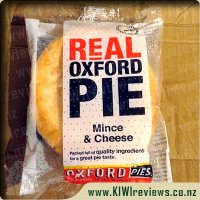 Mince & Cheese pies have been around almost since Noah popped his floating zoo into dry-dock, so every Kiwi knows it's Summer when the pies and sauce come out of the picnic basket at the beach!

And here we are talking about the mince and cheese pie. A lot of people will pick steak and cheese over this but not for me, this is my go to pie, if I need a pie fix I usually get this type 97.5% of the time.

Oxford have managed to get great filling inside some great pastry, the mince is actually mince and not what other people put into pies and there was enough of the tasty cheese within to satisfy my needs.

The bottom of their pies never seem to get soggy and the pastry is great, nice and flakey and made just right. This is a staple pie for many, and I think if you want a decent tasting one, give Oxford Mince and cheese pie a crack.

Mince and Cheese isn't my preferred pie. If I want something quick to go, I tend to opt for steak & cheese by choice, however I have been known to chew back a mince & cheese when my choices were limited and my hunger wasn't. So, based on that, actually liking this pie as much as I did was a very pleasant surprise.

The pasty was light but sturdy, easily chewable without being flimsy yet sturdy enough not to collapse in my hand without being tough. A delicate balance, and usually not one that works in a microwave, where the pasty usually goes limp and soggy them morphs straight into show leather when the temperature drops to something edible!

The filling was very good, plenty of flavour though I would have liked to have seen a little more cheese... but then, I am a bit of a cheese fiend when it comes to pie - anything short of fruit pies is better with extra cheese, in my book.

I was pleased to note that the mince had some nice chunks in it, and wasn't that horrible "beef puree" some pies have... which is why this is clearly a premium grade pie.

I used this pie as part of a meal, a favourite in our house - Pea Pie Pud Plus... Mixed veges (this time, instead of the usual minted peas, because we had run out), Pie (of course) and mashed potatoes (the Pud) and the "Plus" this time was garlic carrots. Sometimes, if I have to use a budget pie the meals is... not as good as it should be, shall we say. This time, everyone, including 5yr old Mr Fussy ate their entire meal with gusto.

Overall, if I found myself in need of pie, and this was the only option in the cabinet... I wouldn't hesitate. While not my first choice, it's a great Plan B that has almost as much appeal for me now. (OK, I have to admit, we actually had four different pies, and everyone got a quarter of each pie. That way I could gauge everyone's reactions to all the options.)

The first thing I did once I had heated the pie was peel the pastry lid off. I could see a layer of cheese covering the mince. This pleased me as I has recently had some other pies that had all cheese down one end. The mince was very tender and had no gristle or fatty bits. The gravy was delicious and almost sweet. I am sure my husband and kids would enjoy this pie but once I had taken a bite there was no way I was going to be sharing.

Ahh, the humble mince and cheese pie. This is the flavour we are most likely to purchase at any given time. My husband feels that steak and cheese pies are often more gravy than meat. A way around that is to get mince, where the filling is likely to be more thorough. We get Oxford pies quite often for a lunch time fix and this is definitely our go-to.

This pie has a good amount of filling. The mince is good quality and the gravy mixed in has a good flavour to it. In general I have found that these pies lack the visibility of cheese which marks them down slightly in my book. Though that pocket of white hot lava cheese found in other pies can be a hazard, I still want to really taste that cheese goodness. I'm not sure I get that in this pie.

The pastry on this pie was flaky and easy to pull apart to enjoy. It also stood up well to being bitten into. The contents didn't spill out all over the show, because the bottom didn't go soggy. This was a good sign of quality pastry being used by Oxford to create their pies.

While it might not be the most exciting flavour on the market, it will continue to be our staple favourite in this range. A good standard pie, though more a mince pie than mince and pie.

A mince and cheese pie has always been my fall-back pie, it's the one out of all that I have always enjoyed and so I'm always happy to eat one of these if there is nothing else good in sight.

This is a good sized pie, I know that one on its own would be just right for me, however this time I had to share with my husband. My first impression was of a simple packet but that isn't always a bad thing, so I wasn't going to judge it solely on it's appearance.

Taking a bite it was everything that I expect of a mince and cheese pie. Everything was nice and soft so no hard work required. There was a lovely amount of cheese and the mince tasted great. The pastry was a little hard at places but that may have been because I cooked it a couple of minutes too long.

This was a nice Mince and Cheese pie and I would gladly eat it again.

There was plenty of flavour, but after heating from frozen, the fillings held the heat for quite a bit of time, so I had to wait for a while to avoid having my taste buds burned right off my tongue! The cheese was nice, it was gooey and went well with the mince, which is the main thing I love about these pies! The taste wasn't that different from mince and cheese pies from other brands, but what I can say for sure is that I had no problems with this pie whatsoever!

The taste was awesome, these pies are still as good as they used to be, and the cheese was the best, it was gooey and delicious. The fillings were great, but they could cause a mess if they were eaten in a car. The pastry was good, though it was soft, so when I tried eating it with my hands, me holding it made it buckle, and then the lid popped off, which could lead to spillage; I would recommend taking care while eating, unless you want a big glob of hot mince on your pants!

Sea salt caramel. A recipe direct from our Nana with an added hint of vanilla to give this already awesome flavour a new modern spin.