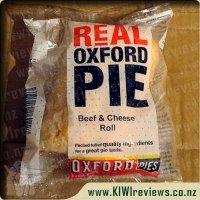 Packed with real meat and cheese for a real flavour, then wrapped in a buttery flake pastry, this is a sausage roll for those with a keen appetite.

I had this for my lunch a couple of days ago. I nuked it in the microwave for a bit. When it came out, the flakes of pastry on the top were curling and soft. But the overall pastry case was pretty solid, and still had some crunch.

This beef and cheese roll is definitely built for someone with a huge appetite. It's about 1/3 bigger than their other sausage roll available. The meat inside is pretty similar as well. The beef filling is very flavourful, and distinctly beef. I did find a few small pieces of onion in the mix. Unfortunately I didn't detect any cheese here. Potentially, the cheese was really well mixed in to the beef, but I missed the melted cheese look.

After eating this beef and cheese roll, I was definitely feeling full. Usually after lunch I need food around 2 hours later, but I didn't need food again until dinner time with this product. This cut down on my desire to snack as well.

Overall, the taste and quality of the pastry was good. My only downer was the lack of cheese being visible because I love cheese. I think this has good value for money since it saved me snack money.

Honestly, I must have stranger tastebuds than I thought. Reading the reviews presented so far, I am having trouble understanding why I found this roll to be pretty good. Sure, there was almost no noticeable indications of cheese at all, but I wasn't too worried by that because I usually find cheese-laden hot foods to be either oily as all heck, or the cheese ends up 6x hotter than the rest and I suffer second degree burns to the roof of my mouth.

Having tried many "beef rolls" that turned out to be utter rubbish, I guess my expectations were pretty low to start with, which meant that this roll, though a little less than ideal, was for me still a tasty enough treat. Filling, with good pastry it was acceptable on it's own, good with some sauce, and just great with some NZ BBQ Chilli sauce.

Overall, though it may not be my first choice if I had a range of options to choose from, it's certainly one I wouldn't have any hesitation in choosing if I wanted something filling to grab'n'go and a pie would prove awkward... such as if I needed something to snack on at the start of an early morning long drive.

When I was given the bag of Oxford Pies to review I was intrigued by the giant sausage roll that was labelled as a Beef and Cheese Roll. It was huge. When you think of a sausage roll you think of morning tea but this was a meal sized roll. It wasn't really a sausage roll either (although it never claimed to be), it was meatloaf with pastry wrapped around it.

To be honest this is the most disappointing of all the Oxford Pies products I have tried. I couldn't taste the cheese and looking at the list of ingredients I see there is more stock than cheese in it. The roll was so filling that I feel like I have just had Christmas dinner and have a heavy feeling in my stomach. Yes I am a woman but I have a very big appetite.

If this had been the only thing I had tried from Oxford Pies I would probably never buy any of their other products but because I have enjoyed so many of their fabulous products I just know this one isn't for me.

This Beef and Cheese roll turned out to bee too beefy and not enough cheesy. To start off with first impressions, plain and simple wrapper and a decent sized portion, much bigger than a sausage roll.

This was a very good serving size so I was more than happy to split it with my husband. Giving this a hearty whiff I could smell the beef and the onion but little else. The list of ingredients on the back says that there are herbs and cheese in this but I couldn't smell/see any trace of this.

Giving it a bite, which wasn't the easiest from its size, and all I could taste was beef and salt, barely any taste of cheese at all which was a disappointment. I also found this to feel too greasy in my mouth and an after taste that wasn't pleasant. I was only able to eat two bites before it became clear it just wasn't going to get better, my husband didn't want to finish off my half.

I didn't like this at all and so I won't be eating this in the future.

OK, the regular sausage roll was great, but this one, not so much. This roll had the same texture as the sausage rolls that had rather moist and unusual fillings, so this one wasn't that great. I couldn't detect any cheese in the roll, but even though I think it might have been the onion in it that got to me on the aspect of flavour, but the texture was the biggie. I know I said it was moist, but now that I think about it, it was also a bit greasy as well. At least the pastry wasn't what I thought it would be, most sausage rolls have flaky pastry, which has an annoying tendency to come off and fall everywhere.

But the pastry of this roll was quite sturdy, like regular pie pastry, so it stayed in one place and didn't leave a mess. My overall opinion on the taste was that this thing wasn't terrible, but it's not something that I'll be anxious to buy from the shops. However, in all fairness, I think it is safe to say that there are some people who do like this stuff, so the content of this review is only my personal opinion.

The overall taste wasn't that pleasant, so I think I'll give it an 8/10. The fillings were, indeed, rather moist and a bit too unusual for my liking; but the pastry did taste good, it was the best part of the roll. Overall, this is a bit of a disappointment to me.

Oxford Beef & Cheese Roll is definitely a product for those people out there with a keen appetite, it is a decent piece of meat product wrapped in pastry. Think of it as an over sized sausage roll, ideal for those times you want something substantial but only want the one thing.

I was lucky enough to review a bunch of different Oxford items, so I will probably mention this in all of the reviews. I think they need to update the packaging, it is all a bit too plain for my liking and needs an update to better capture the eye. I guess at the end of the day it is just a wrapper.

For the Beef & Cheese roll itself, it is the usual type of consistency expected for a product that is like a sausage roll. It tastes like you would expect it to, and for me that may have been the problem, it needed something else, more seasoning, more taste, maybe some herbs. I just felt it was quite bland.

It was filling and was something I would try normally, I just felt let down once I had eaten all of it, it fulfilled my hunger needs, it was convenient, and the pastry was good. Just needs a tweak in the meat filling part to make it better, and more cheese wouldn't go astray.

Sometimes simple is best, this delightful smoked cheese is great on crackers accompanied by a nice wine.

This rich & smokey cheddar cheese is amazing on platters. Just pair it with some salty crackers, organic olives and chunky chutney such as plum to bring out the flavours. Add a nice glass of wine and you are set.