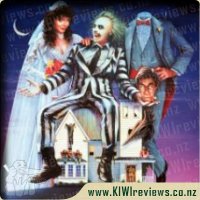 What's a yuppie ghost couple to do when they're quaint New England home is overrun by trendy New Yorkers? They hire a freelance bioexorcist to spook the intruders. And everyone gets more than he, she or it bargained for! Michael Keaton stars as Beetlejuice. He's a juggernaut of jokes, jolts and jive who hurls oneliners, spins into grotesque forms, gobbles insects and can't leave ladies living or dead alone. Alec Baldwin, Geena Davis and Winona Ryder share starring honours. Say the B word three times and have a wonderful DayO!

This movie is falling behind in the times in terms of graphic quality and CGI, but at the time of release, it was top of the line. In fact I hope that it gets a remake. Don't change any of the content, just reshoot the exact same film with our upgraded technologies. This film is old enough that the majority of the latest generation haven't had the pleasure of seeing it.

Full of hilarious and quirky humour, Michael Keaton is an enigmatic title character, who steals the show. It is wacky, zany, kooky, naughty, it is a movie that is so full of jokes, skits, and references that you will find something new every time you watch. And it will consequently get funnier every time.

I highly recommend you give it a watch if you haven't seen it already, but be aware that there is nearly a complete lack of special effects. It is still a classic. Respect it.

Have you died and some pesky living people have moved into your house? Are you too knew at hunting to scare them away? Well whatever you do, don't call upon Beetlejuice, he may seem to be helping, but he's only in it for himself.

Alec Baldwin and Geena Davis do a great job playing a devoted husband and wife who suddenly find themselves dead and trapped in their home. They adapt to their new 'life' when a new family moves into the home, a father who needs to de-stress, a wife who is an 'artist' and sets about changing the house and a daughter who hates life.

Enter Beetlejuice, combined with Tim Burton's crazy style of directing and you have a really fun movie. There's a lot of crazy moments and a fun dance number that will have you singing along with it. The special effects make use of what looks like clay animation, and the various dead characters are lots of fun to look at.

I recently re-watched this with my husband and my mum watched it for the first time. My mum really enjoyed it and it just goes to show that it's a movie that stands the test of time.

If you like Tim Burton films then Beetlejuice is a must see.

Score: 9.3
Product reviews for listing 7579: Fantastic Beasts and Where To Find Them -  Directed by David Yates

Fantastic Beasts and where to find them is a 2016 fantasy film directed by David Yates. A spin off of the Harry Potter films and written by J.K Rowling. This is Rowlings screenwriting debut and is inspired by the book with the same name.

The year is 1926, and Newt Scamander (Eddie Redmayne) has just completed a global excursion to find and document an extraordinary array of magical creatures. Arriving in New York for a brief stopover, ... more...