« The Karazan Quartet : 3 : Prince of the Wind review 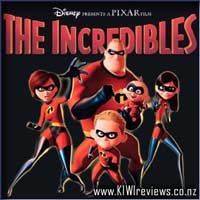 A dysfunctional family of famous superheroes, led by the retired and overweight Mr. Incredible is placed in a quiet suburb by the Witness Protection Program in order to protect them from a public outburst, when Supers are branded a Socially Disruptive Influence.

But their peaceful existence is hardly that, with family disagreements and work stresses causing Mr Incredible to slip and flip-out forcing them to relocate, change names, and generally upturn their lives. When he is offered a chance to relive his old glory, Mr I dons his outfit once more, and takes off for 'a conference' that generally leads to more trouble than it was worth.

But from every pile of ashes could rise a new phoenix of hope...

I LOVE this movie (which is a great thing when your 3 year old wants to watch it again and again).

With lots of laughs, touching moments between family members, delight in Jack, plenty of action and fight scenes this is a very well rounded film for the entire family and one that I can see my grandchildren enjoying just as much in 20 years as my children are today.

After seeing the 'Behind the Scenes' on TV the other night, I had to go see this one... not that I had any intention of missing it anyway. Pixar have never made anything I haven't enjoyed... and the off-beat stuff is the best of all!

The lead-in to The Incredibles contains a little miniflick about a lamb with a bad haircut, and a rare creature that seemed to be a hybrid of a rabbit, a kangaroo and some form of dear. So very, very warped. A great entree, as is becoming usual in such films.

The main feature was stunning! Great plot with some real humour, special effects only possible with CGI, and brilliant characterisations. I LOVED all the cool vehicles the arch-villain had created, my personal favourite was the jetcraft shaped somewhat like a short manta ray. It could drive, fly and swim! Awesome! With that feeling of taking a little sideways poke at all the comic superheros of the 50-70's, this was a non-stop laugh rollercoaster.

If you have seen 'Unbreakable' with Samuel L. Jackson and Bruce Willis, you'll find the 'twist at the end' to be a little predictable, especially as it was actually about half way through the movie instead.

Overall, all in our moviegoing party were in agreement, a great movie, and has a space in our collections pre-booked.

The mythical city of Camelot, in a time before history began. A fanatical realm of legendary beasts and mysterious peoples. A dangerous world in which magic has been banned by the ruthless tyrant, Uther Pendragon. When Merlin, a young man gifted with extraordinary magical powers, arrives in the kingdom he quickly makes enemies including the heir to Uther's crown, the headstrong ... more...