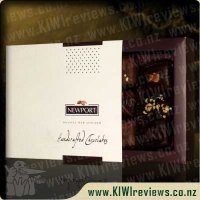 Disclosure StatementFULL DISCLOSURE: A number of units of this product have, at some time, been supplied to KIWIreviews by the company for the purposes of unbiased, independent reviews. No fee was accepted by KIWIreviews or the reviewers themselves - these are genuine, unpaid consumer reviews.
Available:
via Online Store and Branded Outlet Stores

Select your box of chocolate and fill with the flavours and combinations of your choice. Or Just add it to your cart empty, we will make a selection for you.

We want to bring the fun of "choose and select your chocolates" as you probably did in our shop, but now in the comfort of your home.

Watties Bit on the Side - Smoked Paprika & Tomato Sauce
Rating: 8.3

There are times I get so distracted, that I forget to type up a review, and find my notes days, weeks or even months later... this is one of those times.

Back in August I was given a sampler box of these to try... hand-made, a huge variety of flavours to choose from, and the ability to customise your choices via the website make this an astoundingly versatile present for someone you care about... or decadent treat for yourself.

I can't tell you all of the flavours I tried, because to be honest they all tasted so good that I got a little lost in the waves of flavour, though some really did stand out. From hints and a bit of digging on the website, I think I have identified my highlights:
• Peanut Butter: Crunchy peanut chunks swimming in a rich milk chocolate... not the prettiest by any means, but the amazing taste more than makes up for the lack of elegance.
• Orange & Grand Mariner: Another amazing orange variant, with that naughty hint of fine liqueur to add another dimension to the rich tapestry of flavours.
• Raspberry, Lime & Chilli: The sweetness of the raspberry, the tanginess of the lime and the sharpness of the chilli are all brought together by the creamy smoothness of the milk chocolate to make a small parcel of magic for your mouth.

On the flipside, there were a few I wasn't a fan of, but in all cases it was due to personal taste preferences rather than any fault in the chocolates themselves, which I am sure would appeal to many others. To avoid any unintentional bias, I won't mention them, but suffice to say that if you plan to assemble a box for someone, be sure of their preferences, because it would be such a shame to spoil such an amazing array of goodies by including one that doesn't appeal to the intended recipient.

Overall, though the price may seem high, you must take into account that these are not mass-produced by the tens of thousands on some conveyor belt monstrosity... these are crafted by hand, by someone who knows that all food should have one key ingredient - Loving attention. Only by including this can you end up with such delicate morsels that give such huge flavours. If I am after a quick sugar fix, there's plenty of bulk bars on the supermarket shelves... but to tell someone "I think of you with great admiration, love and/or respect..." then this is where I will be going first.

Have you found a Golden Key to Joyville yet?

The Marvellous Creations mixing room is a truly magnificent place, it's where all the chocolatey magic happens. An array of fantastic ingredients catapult through the air in anti-gravity and the Joyville mixologists ride the walls on magnetic skates.

Only a few get to witness this wondrous sight, but here's your chance to see the inner workings of the Cadbury factory ... more...