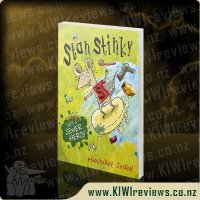 Stan Stinky is annoyed. He's being forced to spend his summer in the boring sewer he's lived in his whole life, while all his friends are off surfing the storm drains of the Bahamas. What's worse is that his mum is making him work aboard his crazy uncle's boat, The Noodle.

Uncle Ratts and his sidekick Roachy think they're adventurers, but in reality all they do is deal with some very smelly poo blockages. Then Ratts and Roachy disappear up a u-bend into the terrifying unknown... a human house. Stan must come to their rescue!

I was pretty sure that Stan Stinky would be a hit with my daughter. After all, she loves animals. She adores another book series about a mouse, and she loves books that are gross and full of toilet humour. This book is about a rat called Stan, who lives in the sewers. It's the school holidays and all his friends are out of town.

The subplot about a kid (or rat) that is on school holidays and is worried about having a boring time, is one anyone can relate to. I have plenty of memories of boredom going hand in hand with holidays. Enter Stan's uncle and his mate Roachy, and Stan gets the trip of a lifetime.

This is a fairly long book by kid's novels standard. It took us about one and a half weeks to read it. We did a chapter or two a night. It took my daughter a wee while to get into the story. But I noticed after a few days she was finally coming to sit and look at the pictures as I read. There is one part in particular that really tickled her funny bone. We have a toddler in our house and she really related to some of the silliness around that subject.

I thought this was really good value. $12 for a book this size is ace. It would make great school holiday reading. It also has a bit of interesting craft suggested in the back. I think any kid would enjoy this, but especially those not grossed out by poo.

I received this book recently and although it is aimed at 8+ years, I tried it out on my 5 year old - although obviously she couldn't read it herself, so I was reading it to her. This was our first chapter-book to read together and she was pretty excited about it... and the funny picture on the front and content all about poo and other stinky stuff really appealed (yes this isn't just a boys book)!

I started off intending to read just one chapter before taking a break, but she was hooked instantly and wanted to keep on going. Finally we took our first break after 2 and a half chapters, and only a couple of hours later she was begging for more of it before bed. Yes, some of the themes were a bit beyond her and required me to explain, but that only goes to show it Is a book she will grow into which is always a bonus.

I won't go into much of the story - you can read above what it is about, but yes be prepared for lots of toilet humour - the chart about different types of poo really appealed to my 5 year old! The humour continues from start to finish, so it never gets boring.

The book has some nicely sketched pictures to help the imagination... so it is a nice transition from kid's picture books, into something a bit more grown up - perfect for the target age (I'd recommend for ideally 8 or 9 years old). However it also suits younger children who like being read to, and as an adult, I found it quite a fun and compelling myself!

I'd recommend this for any avid reader and also perhaps to those who need a little more encouragement to read... the theme is bound to keep children engaged and amused.

There are many rumors about the bay off Guadalcanal in the Solomon Islands. Some say it was the site of the lost empire of the Solomon king and that great treasure lies beneath the waters. Others say terrible things happened here, atrocities and disappearances at the hands of cannibal giants. Which is exactly what attracts the attention of husband-and-wife treasure-hunting team Sam and Remi Fargo.

How could they resist? On a hunt from the Solomons to Australia to Japan, what they find is both wonderful and monstrous - and like nothing they have ever seen before.