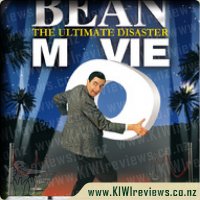 Mr. Bean, sent on a mission to California to escort the world famous painting of "Whistler's Mother" to its new home in The Grierson Gallery. What the gallery owner, one of the richest men in America, and his curator Davis Langley believe, is that Mr. Bean is Dr. Bean, a renowned art expert. In fact he is just a sleepy-headed, wildly eccentric museum guard.

He's also one of the clumsiest, craziest, wackiest, wildest, most bizarre character they have ever come across, and certainly not someone you'd entrust one of the world's most valuable paintings to. But they have- and now wreaking havoc in the Grierson Gallery and wrecking Langley's marriage is just the beginning. With only hours to go before the official unveiling by the museum's benefactor, General Newton, something terrible has happened to the "Whistler's Mother" and only one man has the power to put it right. The only problem is... That man is Bean.

I love Rowan Atkinson, especially love him as Mr. Bean. We own a few Mr. Bean DVDs, as well as a few Black Adder DVDs but it is the Mr. Bean DVDs that are my favourites. We introduced our teen boys to Mr. Bean and they to love him and I recently discovered my near 8 year old daughter also loves him. And what is not to love? Mr. Bean offers unique humour of his own. And with his quirkly ways, crazy faces, funny voices (noises),and obvious stupidity, you can not help but love him.

So when my hubby brought home Bean - The Ultimate Disaster Movie on DVD for us to watch, I was really excited and could not wait to watch it. It is ok, not great, but definitely ok. There are many laugh out loud moments and Mr. Bean still has his clasic humour and stupidity but the movie just comes across to American and much to scripted. You do not get the same scripted feel from his television series.

The movie is not a complete loss. You get the gist of it easy enough, amd it is easy enough to follow. It is just not as funny as his show. However no-one else would have been able to pull off such a movie as this. It definitely is a disaster movie that only Bean, Mr. Bean could successfully muster :)

Having always been a Mr Bean fan I was excited when I first saw trailers to this movie. My mum, also a fan, took me to go and see it at the theatres when it was showing. When I first saw it I rather enjoyed it, but now that I'm older, not so much, too Americanized.

Bean is a guard at an art gallery and sucks at his job, since they can't fire him they decide to send him to america and leave them to deal with the joy that is Mr Bean. Cue problem after problem, breaking up a family then putting it back together again and potentially ruining one of the most famous paintings in history.

The jokes are ok, if you don't bother relating them to Mr Beans usual humour, I find it too Americanized and so it relies on more visible jokes than the more subtle jokes etc and type of humour that I enjoy from Mr Bean. My kids enjoy this movie, but I much prefer the movie that came out later on, which felt more true to Mr Bean than this movie was.

Overall it was an ok movie, if you don't relate it to the original Mr Bean, I own it, but I almost never watch it.

ON a non-stop quest for justice and revenge that crisscrosses the globe, Bond meets the beautiful but feisty Camille, who leads him to Dominic Greene, a ruthless businessman and major force within the mysterious 'Quantum' organisation.

When Bond uncovers a conspiracy to take control of one of the world's most important natural resources, he must navigate a minefield of treachery, deception and murder to neutralise Quantum before it's too late!